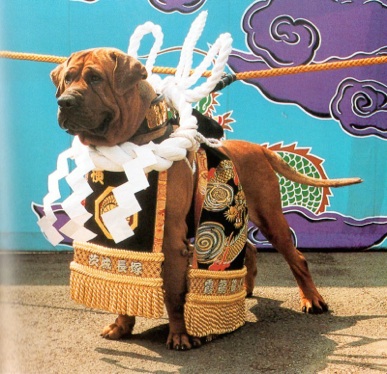 They are called the Sumo Wrestlers of the Canine World, and like sumo wrestlers, the winner and loser in a contest between two Tosa Inu is determined not by bloodshed, but by a show of dominance and a display of submission.

We loathe (vehemently) the very idea of dog fights (who here doesn’t?), but like it or not, a few breeds were bred in certain cultures to do just that. The Tosa Inu, however, has a tradition that’s unlike what one might expect of a dog fight. In a Tosa Inu bout, the goal is not to harm or hurt the opponent, but to dominate him.

At a typical match, a champion Tosa is brought to the Tosa Fighting Center where he is placed in the center of the ring wearing the ceremonial garb and head dress seen in this picture. After tourists take their pictures, the dog is removed from the ring to allow a bout between two other dogs to take place.

After the dogs enter a ring, the opponents sniff each other out. If both or either are disinclined to “fight,” judges disqualify the dogs and the match is cancelled. The matches are governed by the Tosa Fighting Association and there are at least seven people watching the bout from all angels to make sure that rules are being followed and that neither dog is hurt. If it looks like things are about to get out of hand, one of the dog’s owners will enter the ring to stop it. If either dog is hurt in any way, the fight is stopped immediately and both dogs are seen by veterinarians. If we understand correctly, the fight is more of a wrestling match than anything else.

The fighting of Japanese Tosa-Inu dogs is legal, highly publicized, and a celebrated part of Japanese culture. They’re typically held on holidays, are performed in pricey venues, are a popular tourist attraction, and actually occur only a few times a year at most. The dogs are treated like celebrities and are even interviewed on Japanese television. We’ve read that these dogs are worth hundreds of thousands of dollars and wears ceremonial clothes that are worth tens of thousands of dollars.

Tosa fighting is rooted in the Japanese culture, and gambling is not a part of this tradition. Historically, Samurai used to take their soldiers to witness Tosa matches so as to learn to develop their own fierceness and courage. We still don’t love the idea of dog fights, but we’re passing this along so that you know the history of this breed.