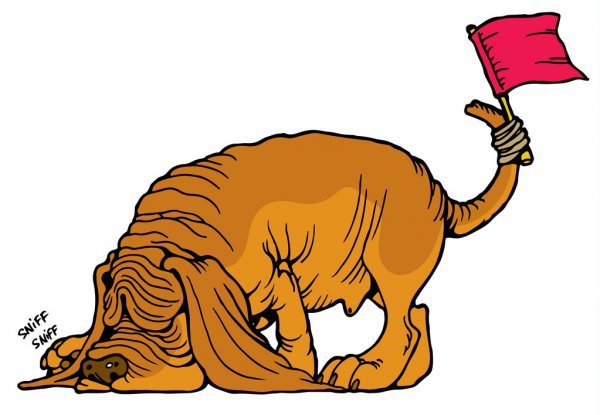 The terms are often confused, if not interchanged, but there is a difference between tracking and trailing.

Tracking was first offered as a separate event by the AKC as far back as 1947 when the first Tracking Dog (TD) titles were awarded. Back then, it was originally part of the Utility Class, and a dog had to pass a separate tracking test in order to earn a UD. For the first ten years, tracking got all of one paragraph of description in the regulations which set out the barest basics of length and age of the track.

On the day of the test, tracklayers walked the tracks, deposited article(s), and retraced their steps to remove all but the two starting flags.  By 1938, it was added that the tracklayer couldn’t wear rubber-soled shoes, and the dog had to be on a 30-40 foot leash and work without help from his or her handler. By 1943, the tracklayers were required to follow the track, deposit the article, and walk directly off the course.

Currently, a dog can earn four AKC Tracking titles: Tracking Dog (TD), Tracking Dog Excellent (TDX), Variable Surface Tracking (VST), and Champion Tracker (CT). But there are holes in our knowledge of which breed won certain tracking titles, including the very first TD, and we’d be beholding to the person who can fill the gaps. The AKC, whom we first contacted to get information about which breed (not the first dog of its breed, but the first breed) was the first to earn any title, was unable to help, and they wouldn’t mind having this information, either. We suspect that individuals invested in their respective breeds might know of these firsts, so we’d love to hear from you.

We do know that the Tracking Dog Excellent (TDX) title was first offered on March 1, 1980, and with approximately 125 million scent receptors and the ability to track scents that are several weeks old,  it’s no surprise that a Dachshund named Gretel Von Bupp Murr, UD, earned the first TDX. Dachshunds routinely show up on lists of breeds with the best sense of smell.

When a dog has all three tracking titles, he or she earns a CT, or Champion Tracker title. The first dog to earn this designation was a German Shepherd Dog named “Sealair’s Raggedy Ann UD TDX,” owned by Darlene Ceretto who did it in 1995.  She was also the first exhibitor to put a VST title (Variable Surface Tracking Test) on her dog.

In 2014, the Tracking Dog Urban (TDU) title was added, a test that involves hard surface (“non-vegetated”) and grass (“vegetated”) land.  Sadly, we don’t know which breed earned the first one.

The Versatile Companion Champion (VCCH) title is awarded to dogs earning an Obedience Trial Champion (OTCH), a Master Agility Champion (MACH), and a Champion Tracker (CT). This title was first awarded on February 15, 2009, to VCCH Jakki, UDX, a Golden Retriever.

The first dog to pass at any Tracking Invitational was a Border Collie owned by Phyl Dorr and Ed Presnall. One of his Field Spaniels was also the first Champion Tracker to win at both the Westminster Kennel Club and AKC/Eukanuba National Championship.

As aside, the breed of the dog which holds the world tracking record may surprise you.