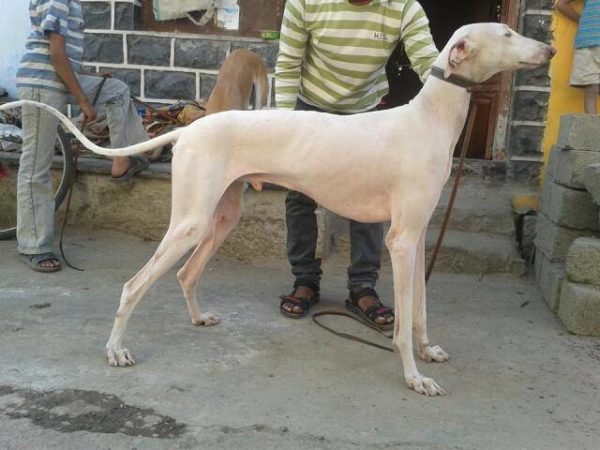 To judge by an assortment of Internet sites, there seems to be a bit of confusion about the difference between the Mudhol Hound and the Caravan Hound, both breeds native to India.

As recently as 10 years ago, Mudhol Hounds were the same as Caravans, but the state government of Karnataka set out to create a “state breed” which today is markedly different from the aboriginal Karwani of Maharashtra. The Mudhol Hound of today is a much taller dog than the Caravan, is usually white in color, though sometimes parti-colored (white and brindle or white and black), and (some say), modern lines have a heavy infusion of Alaknoori and/or Rajapalayam in them.

Interestingly, the feathered version of both breeds is registered as “Pashmi.”

Photo by Neil Trilokekar of a Mudhol Hound since the concerted effort to create an identifiable “state breed.” Markedly different from the aboriginal working Karwani/Caravan.