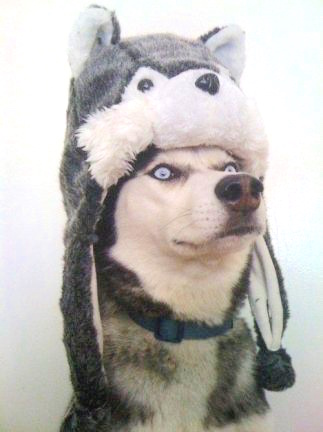 The 2017 University of Connecticut football season got off to a good start with a win over Holy Cross (sorry, Crusaders), and if one puts any stock in predicting wins based on mascots (and there are those who do this), NPDD hopes the UConn Huskies fare well.

The Husky has been the school’s mascot since 1934 when students chose it via a popular poll (making it one of the few university mascots in the nation to have been so selected).  All of UConn’s huskies have been named “Jonathan” in honor of Jonathan Trumbull, the last colonial, and first state Governor of Connecticut. All but the first real dog (as opposed to a person wearing a husky suit)  have had one brown eye and one blue eye. That changed in 2013 when UCONN officially changed their logo to a black and white Husky.

There have been thirteen “Jonathans” since 1934, the newest born in 2013. This Jonathan has the more traditional black and white coat (as opposed to past dogs which were primarily white) and blue eyes.  To prepare for mascot duties, a professional handler is brought in to work with Jonathan full-time, and a vetting process makes sure the dog can handle large crowds and loud noises before he assumes the role. 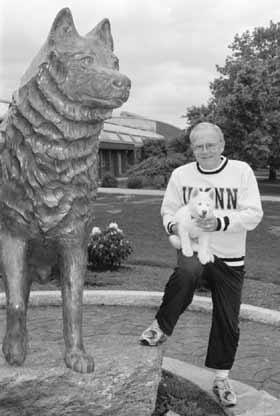 Then UConn President, Harry Hartley, with Jonathan XI as a puppy next to the bronze Husky dog statue in 1995.

In 1995, a Husky sculpture created by Larry Wasiele was unveiled, and has since become a landmark often included in graduation pictures, as a meeting place, and something with a nose to rub for luck.  In preparation for the statue, Wasiele began the process by looking for perfect husky characteristics – paws, legs, face – to use as a model for the statue. He used images of the current “Jonathan X,” dogs that were on South Pole expeditions, and huskies from Jack London novels. He even studied the face of his own dog, “Surf,”  a German Shepherd.

Elements from each of the dogs were sketched, then brought to life in a carved block of styrofoam Wasiele used Sculpey clay to envelop the styrofoam figure which allowed the model to arrive in mint condition at the Paul King Foundry in Johnston, R.I.

There was also special concern that the statue be especially durable. To encase it, Wasiele chose ⅜” thick bronze that – two times thicker than the foundry had ever worked with before.  “I fired a 30/30 rifle into the bronze to test it,” Wasiele later said, “and with the ⅜” [thickness], there were no marks.”

When it came time to place the sculpture, a large tractor with “UConn” emblazoned on its side arrived at the sculptor’s home to collect the 6-foot-by-7-foot, 1,000-pound+ statue “wrapped like a mummy.” Wasiele held the “dog” by its legs to prevent any damage on the two-mile ride to campus.

One little secret of Wasiele’s statue has to do with the ears. The former president of the University, Harry Hartley, who was at the helm during the process of selecting the artist and erecting the statue, still likes to tease the sculptor about the dog’s ears. “I still joke with Larry about those ears,” said Hartley. “Those ears aren’t Husky ears, they’re German Shepherd ears.”