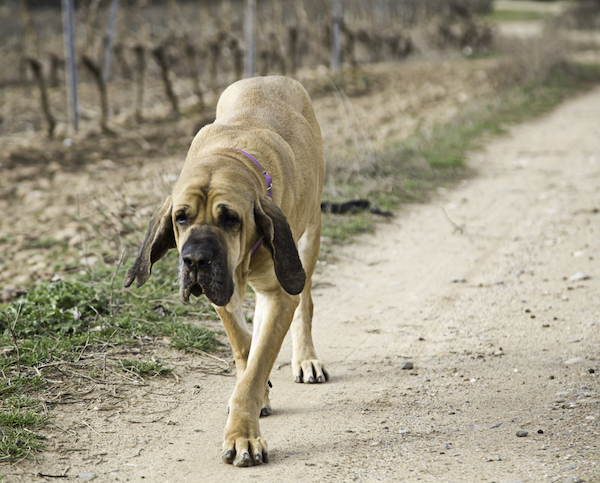 Scroll down for a little mood music for this post, one you’ll love if you’re profoundly deaf or three years old:

Sorry, we couldn’t resist. We promise the next one is better, though we still suggest turning off the volume because the tune isn’t that great. It’s the camels we want you to watch, anyway:

We know this will come as a complete shock to you, but the way these camels are walking is called (wait for it) a camel’s pace. It’s a long, languid, elastic stride reminiscent of how big cats move, but there is a canine breed that not only moves this way, but has a breed standard that calls for it, and that is the Fila Brasileiro. Check it out:

Two legs move on one side first, followed by the two legs on the other side.  This causes a rolling lateral movement which is accentuated by the dog’s tail when he raises it.  This distinctive rolling stride (some say it’s unique in all of dogdom) effectively makes the dog capable of sudden and swift changes in direction. Indeed, it would be a mistake to assume that this is a lumbering dog. The Fila has fantastic agility, and its gallop is so powerful that the dog can reach a remarkable speed for such a large and heavy dog.  In fact, breed experts say a Fila can run at speeds of up to 35 miles an hour, a trait fully appreciated by Brazilian farmers when it came to chasing down runaway pigs or patrolling the perimeter of a large estate or farm.