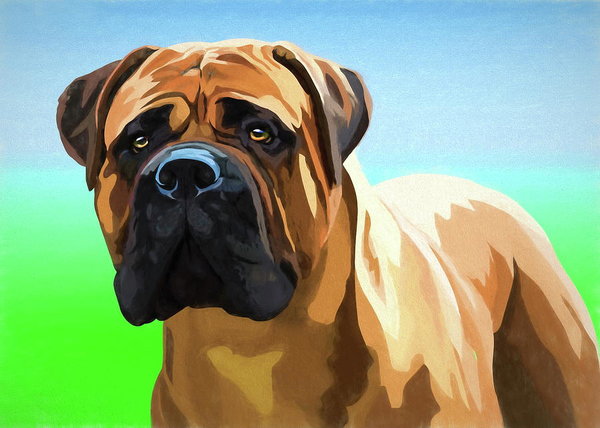 As its name suggests, the Bullmastiff breed was born from a combination of the Mastiff and the Bulldog. These crosses beginning in the mid 1800’s were made between Bulldog and Mastiff until a ratio of 60% Mastiff/40% Bulldog was achieved, and for a long time, the breed’s name was the Bull and Mastiff dog.

In some areas of the UK, however, breeders used the name, “Night Hound,” and while it was true that gamekeepers used the breed to catch poachers at night, the “hound” part of the name was a bit perplexing since there wasn’t any hound in the breed’s ancestry (a backcross breeding of a Mastiff and Greyhound in Australia, however, would be in the breed’s future).

The dogs were also called the “Yard or Keeper’s Night Dogs,” six of which were exhibited at the second National Exhibition in 1871 at Crystal Palace as reported in H.D.Kingdon’s 1873 book, “Dogs.” This is puzzling to anyone who has read that because the dogs were still considered crossbreeds, early Bullmastiffs weren’t invited to dog shows at all, and gameskeepers organized their own shows, the first of which was held in 1900.  What this may have actually alluded to were classes that were put on for Gamekeeper’s Night Dogs, the first of this occurring at the Royal Aquarium (Gamekeepers’ Show) from July 31 to August 2, 1900.

In 1908, the breed was still regarded as a crossbreed as witnessed by the section headed “Cross Breeds” in which there was one entry: A Bull Mastiff named, “Prince” out of a famous Bullmastiff named Thorneywood Terror.

By then, however, there was a movement afoot within the Kennel Club. It necessitated listing on registrations forms if parents or ancestors were a different breed than the dog being registered. From 1901 to 1920, twenty-two Bullmastiffs were listed as crossbreds. Not everyone, however, was persuaded. Robert Leighton, possibly the leading writer about dogs in his day, wrote in “The Complete Book of the Dog’ published in 1922 the following: “…the most popular of all half-breeds, as a watchdog, is the Bull Mastiff, who is almost worthy to be called a distinct breed.”

The Midland Bull-Mastiff Club was registered in 1925, and in 1926, S.E. Moseley, a pioneer of the breed and author of a publication about it, formed the National Bull Mastiff Police Dog Club which helped expose the breed’s talents to the public. Kennel Club records, however, continued to record the breed’s name as hyphenated (Bull-Mastiff) until August of 1927.

Moseley would later be investigated for pedigree fraud, but he was quoted by the author of an article appearing in an issue of the  American Kennel Club’s Gazette in 1934 as saying: “There is no use tracing them [the Bullmastiff] farther back than 1924 because one will only find the crossbred.”

This may have been because early Bullmastiffs were bred for utility, not appearance, but as poaching began to erode as a problem and appearance became a higher priority, breeding programs tilted towards reaching type that would establish the Bullmastiff as a pure bred dog. England’s Kennel Club granted that recognition in 1924, and the AKC followed suite in 1933 – both clubs registering the breed name as one word: Bullmastiff.

Still, as if to be a reminder of its past, some Bullmastiffs have a dark chevron pattern on their back or upper tail that is regarded by some fanciers as an indicator of its ancestral Mastiff-Bulldog ancestors. If one of our Bullmastiff owning readers has a photo of this that they’d be willing to share (full credit given, of course) we’d be appreciative.

4 thoughts on “The Bullmastiff’s Name”