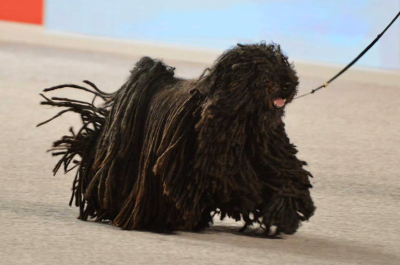 Dogs with straight shoulders have a similar disadvantage. Straight shoulders limit the dog from reaching out with his front, and while leg length has little to do with a dog’s shoulder assembly, it’s a good way to understand the extra energy a dog with poor shoulder angulation has to expend to cover ground.The dog’s shoulder, which lies flat against his rib cage, isn’t connected to the dog’s skeleton. The shoulder, upper arm and leg quite literally float attached to the body only by muscles and ligaments. This construct is well suited for a dog as it gives him the most “bang or his buck” by providing maximum cushioning while enabling flexibility and agility needed to work, retrieve,  chase prey, and catch it.

You might ask at this point why the shoulder wouldn’t swing more effortlessly if there’s no actual joint anchoring it and the front leg assembly in place on the body.  Would would a dog with a straight shoulder move with less reach? What’s to stop it?

The joint between the shoulder-blade and the upper arm has the most impact on the amount of reach (or leg extension) a dog has.  Muscles can, when the dog is gaiting, rotate the shoulder-blade up to 15 degrees from the standing position of a 30 degree angle. When you add an additional 15 degrees of rotation that comes at its maximum extension, we get 45 degrees, the angle of the maximum stride length in a well angled dog. A straight shoulder is limited in its reach and to that 15 degrees of rotation since it’s starting from a steeper and more upright angle, and that keeps the leg from getting out as far from the dog’s body as a dog with better angulation.

A dog with a straight front has a shoulder-blade in a more upright position since there’s limited area for the attachment of its muscles. Put another way, the angles are just too steep to allow full development and proper length of muscling. In mechanical terms, think about the impact that length and angle have on a lever.

Proper angulation between the dogs upper arm and shoulder shoulder act like levers on which the muscles exert force. This changes their position to enable movement of the dog’s leg, and that propels the dog to go in the direction they want to go (usually after a squirrel).  When these two bones are properly angled to each other, they give the dog more room for musculature that connects the front assembly to his chest, rib, back and neck area; more space for muscles to attach means more strength, flexibility, and fluid/agile movement.

This angulation between the shoulder and upper arm also acts like the springs on shock absorbers.  Without the flex of those two bones meeting together at an angle, the weight of the dog quickly breaks down the front.

In a puppy, shoulder angulation can change as the dog matures and muscling develops, and growth can affect this. This is why 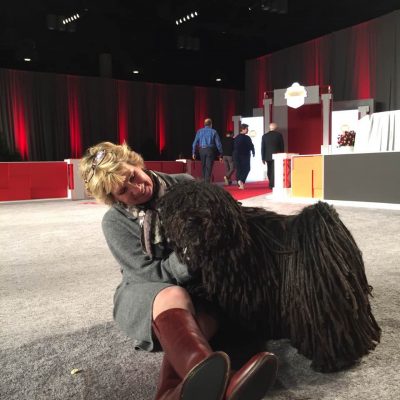 it’s important to keep pups from jumping from high distances, but while providing appropriate exercise because both can impact the “final product,” namely, the adult dog. In some breeds, the scapula is a one of the slowest bones to grow, possibly because it’s a large bone, so it takes longer for the shoulder blade to gain its full length.

With a lack of reach, the back legs of a dog with a straight front might kick up more to get the rear legs out of the way of the front legs when the dog is gaiting, or he’ll move wide in the rear for the same reason. This is one reason some handlers at a dog show will string their dog up on a leash while gaiting: They’re helping the dog get his front legs off the floor and into the air to give the rear legs a place to go. Very flamboyant, but inefficient in a dog that is suppose to work, hunt, etc.

One of the first things that newbies learn about dog structure is the importance of angulation, but they don’t always know why.  When they learn about how a front is supposed to move (and why) – and all the moving parts suddenly “click” in their mind, it makes them comprehend why a dog with a great front (and a rear to match) is all the more special, and is all the more reason to appreciate it.

Images: It can take years to learn how to spot a great front, but when you “get it,” you’ll never unsee it again. Our image is of Preston, the Puli who won Best in Show at the American Kennel Club National Championship dog show in 2016.  In our humble estimation, he had a spectacular front.