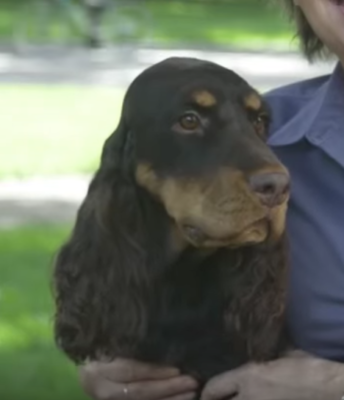 Neither could we know that a few years later, we would get to scritch the tummy of “Marci’s” granddaughter, “Marci,” the Field Spaniel who appears with us in the very first frame. It was not just a reminder of the passage of time, but of how far NPDD has come in the last few years.

We got to meet that granddaughter, “Kate,” when we caught up with Anita Ely at Meet the Breeds, one of the wonderful events at the 2018 AKC National Championship presented by Royal Canin.  Can you see the family resemblance?

Sadly, the Field Spaniel is on the Kennel Club’s list of Vulnerable Breeds which are of British origin and whose numbers are declining to a dangerously low level. In 2017, only 50 Field Spaniels were registered in the United Kingdom.