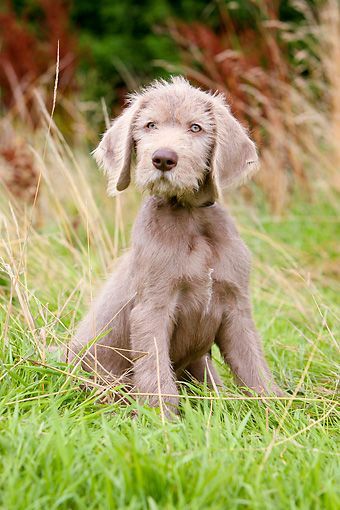 When the breed moves out of the AKC’s FSS into the Miscellaneous Class and eventually advances into full recognition, its name will appear in show catalogs as the Slovakian Wirehaired Pointer.

Another point of view is that the translation of the Weimaraner standard into Slovakian was in error, and that was why the breed was registered as a Rough Haired Weimaraner. Not until 1975,  some say, was the error noticed by the German Weimaraner Club which still didn’t approve. Until this time, breedings between rough and smooth coated dogs had been done with the approval of  breed wardens. When approval wasn’t granted, such breedings quickly stopped.

Long story short, the Slovakian Wirehaired Pointer became an FCI registered breed in 1983. It was recognized by the United Kennel Club in 2006, and in 2018, it became listed as an AKC FSS breed.

The Slovakian Wirehaired Pointer was developed in the 1950s in Slovakia by Koloman Slimák who wanted to create the most versatile dog out of the most versatile breeds. Slimák’s new breed had to be able to hunt well in water, on land, and in forested areas, and it had to be able to point and retrieve all species of game. Because of rough Slovakian winters, the dog also had to be hardy.  Only the soundest dogs in temperament and ability were part of the breeding program, and in the end, Slimák had created a classic continental type Braque breed.

There is a dog called a “Stockhaarig,” that has a short coat like a Weimaraner, but with a coarser texture like the dog once called a rough coated Weimaraner. Some would say it has an in-between coat with both shorthair and longhair characteristics.  There are those who insist that a Stockhaarig is a Weimaraner with mixed genes, not a purebred Weimaraner, but we came across sources that suggest otherwise. That topic is a post for another day.

What we’ve not been able to ascertain is where the so-called, “long coated Weimaraner” fits into this topic. Such a coat is a disqualification in the AKC breed standard, but the Longhaired Weimaraner is accepted by the FCI, and the Australian Kennel Club.  Genetically, the longhair gene is recessive and can “pop up” in a litter between two shorthaired Weims. Again, a post for another day.

It's time to test your breed knowledge, or how good you are at deducing a breed from the language in its AKC breed standard. The following phrase is from such a standard, though we've left out the breed name. Your challenge is to identify the breed, and hey, if you recognize this as YOUR breed, be a good sport and sit this one out. The answer will come in the next couple of hours in the form of a photo-answer. Ready? (and it's not the breed in this photo): "Renowned for speed and endurance, the (breed name) has a strong but racy body, a deep chest with plenty of lung room, a strong back, broad loin and well-defined musculature. A balanced, powerful dog with no exaggerated parts, the (breed name) possesses the grace and attitude of a well-conditioned athlete."
... See MoreSee Less

When the German Kennel Club (VDH) and the Federation Cynologique Internationale (FCI) both agreed to officially acknowledge the "Wolf-Chow," they insisted that the name be changed. The German Kennel Club, however, objected rather strongly....
... See MoreSee Less

On the list of breeds named after a location, one breed is sometimes forgotten. Ironic, since this breed is named not for a border, city, region, or even country, but for two entire two continents, Eu...