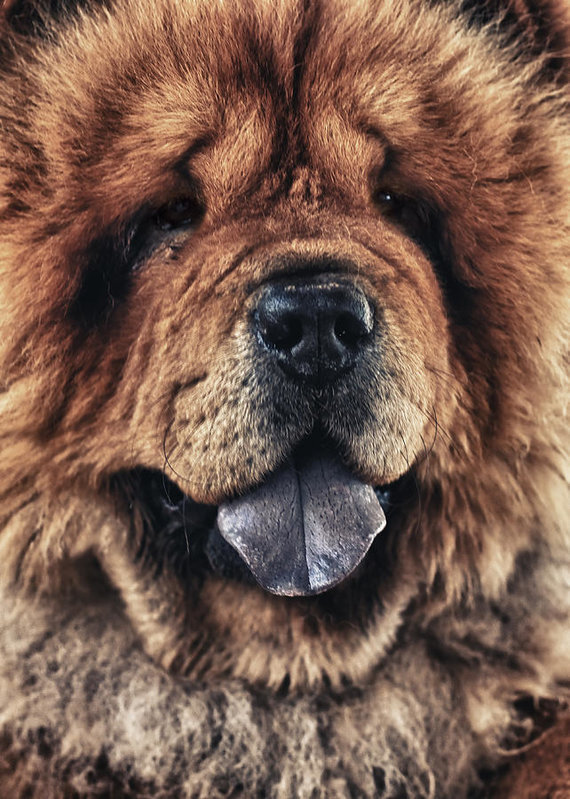 They’re actually born with a pink tongue and develop their distinctive blue-black tongue around 8 to 10 weeks of age. Some Chows might have a small spot or splash of pink if there’s been an injury in the dog’s mouth, and the tongue color may fade with age, especially in Chow Chow’s with diluted coat colors (cinnamon, fawn, or blue, and occasionally, cream). The breed standard is quite clear, however: Edges of the lips are black, tissues of the mouth are mostly black, and gums are preferably black, the darker the better. If the top surface or edges of the tongue are red or pink, or there are one or more spots of red or pink, it’s a disqualifying fault. As an aside, only one other breed is know to have a a blue-black tongue. Can you name it?

Here’s something else you might not know about the breed:  According to the Chow Chow Breed Council of the United Kingdom, Chow Chow puppies initially have 44 teeth instead of the 42 teeth that other dogs have. As the puppy teeth fall, the dogs ultimately end up with the same number of teeth – 42 – as most other dogs (assuming there are no missing pre-molars, etc).

Oh. The only other breed know to have a a blue-black tongue is the Chinese Shar-Pei.

Chow Chow by Stelios Kleanthous is available as a print here.