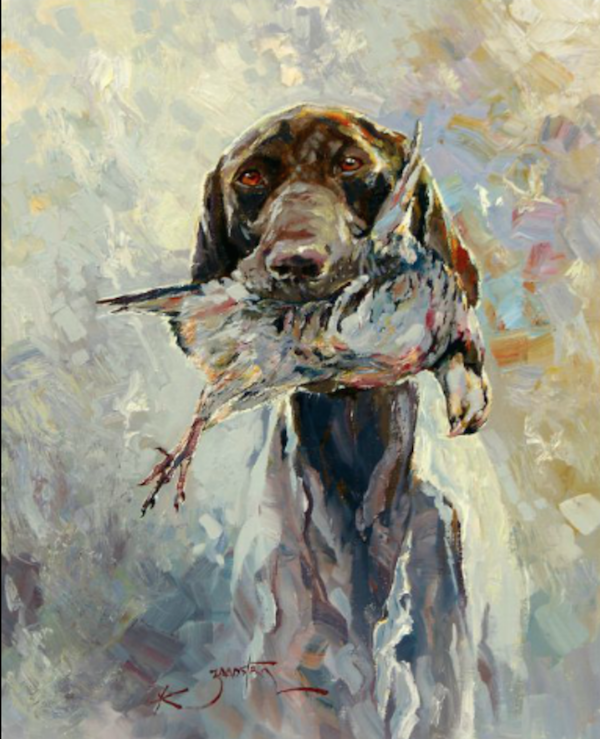 Some sources point out that the German Shorthaired Pointer was bred before the first studbook was created in 1870, so the exact breeds that went into its bloodline are unknown, but there is consensus that the German Bird Dog was a definite ancestor.  Other breeds, however, have been thrown into the mix about what contributed to the breed. They include the Spanish pointer, the English pointer, the Dalmatian, the Weimaraner, the tracking hound, and the Vizsla.

We’ll leave the debate to cynologists and breed enthusiasts, we’re just delighted that the breed exists! This a tremendous hunting dog and companion, and the 380th Air Expeditionary Wing thinks so, too. “Haus,” ‘a GSP, is a well-trained explosives sniffer dog with the 380th. One of his handlers,  Staff Sgt. Zerrick Shanks, says, “We also conduct random walking patrols for suspicious packages and activities. ‘Haus’ is a hard-working dog with an important job, but it’s worth noting he also happens to look pretty spiffy in goggles.” As an aside, the TSA also uses the German Shorthaired Pointers.

As cool as all that is, we want to see YOUR GSPs doing what they do, from field trials and therapy work, to nose work and obedience. Prove us right that this is one versatile breed by sharing  your photos here!

2 thoughts on “What’s in YOUR German Shorthaired Pointer?”