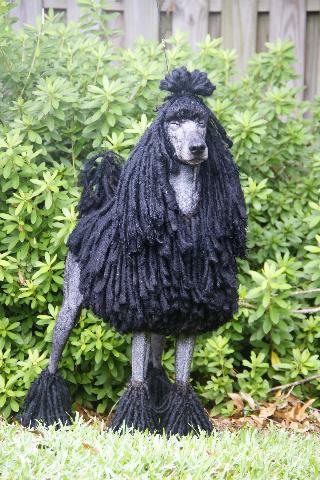 There is one rule of thumb that may prove to be the most challenging for some Poodle owners thinking about cording their dog: Stop brushing! Constant brushing will prevent the dog’s top coat from matting with the undercoat, essential to cording.

Some Poodle coats will “self cord,” but most will mat, and the mats must be “split,” or manually separated by gently pulling them apart into smaller sections. The younger the dog, the shorter the coat, and the more challenging it is to get “purchase” on the coat. Poodle hair grows, however, and gaining the upper hand does get easier. Splitting the mats doesn’t hurt a dog, but he or she does have to learn to stay put on a grooming table. After a few sessions, most dogs fall asleep while having their coats worked on.

Moisture helps tighten cords and control frizz (which is why you’ll often see corded dog owners with a spray bottle at a dog show) but when getting a corded coat started, regular baths help get mats, or “future cords,” established and clean. We’ve seen references to using oil, or even vaseline on the cords, something that was done to corded Poodles 100 years ago when their coats were more brittle. A sound Poodle on a good diet, however, grows a healthy coat, and oiling cords is overkill, in our view, if not a recipe for attracting dirt and an unpleasant odor. Some groomers use conditioners to make a corded coat feel soft and smell good, and it comes down to individual preferences, but some conditioners may interfere with the matting process, and it may be wise to wait until the dog’s coat is well established before using conditioners.

A Poodle’s genetics will determine his or her coat texture, and even the type of cords he or she will develop (wide, spaghetti-width, flat or round?) but some groomers suggest that the thickness of Poodle’s cords should be in proportion to the size of the dog, particularly since Poodles come in Toy, Miniature, and Standard sizes. There are optics that need to be considered with regards to the size of the dog, and a Toy Poodle in thick, heavy cords will present a very different picture than one in thinner, proportionate cords.

As we mentioned earlier, show Poodles over the age of a year must be presented in a show ring in either a Continental or English Saddle trim. It’s best to first use a clipper to set the Continental or English Saddle pattern in the dog while leaving rest of the coat untouched to cord naturally. Once the cords are well established, scissors are used to trim shape and length, but scissoring before that time creates the risk that cords will become thin, weakened, and then totally fall apart.  Groomers also need to be careful when using electric clippers that cords don’t get caught in the blades. When the cords are long enough to trim, they’ll be kept longer on the body and head, and shorter on the bracelets, pom pons and puffs. From that point on, it’s a matter of regular bathing, fully drying the dog after a bath, and routine maintenance of the cords.

There is a book on cording the Poodle for the show ring, which is the book’s actual title. The image you see here was found uncredited on Facebook, but we’re told it belongs to the author of the book, Mr. Joseph J. Genarella, and we would be delighted to give full credit to both the dog and author, if this is the case.  We also want to extend our appreciation to Michelle Scott for her counsel on corded Poodles.

5 thoughts on “Grooming the Corded Poodle”