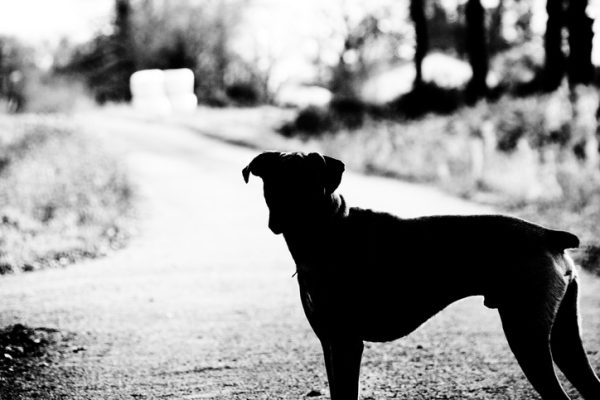 It is Boxing Day* in some parts of the world as we write, but for some people, every day is “Boxer Day.”

A not-so-clever segue into the Boxer breed…

A breed that is never black, by the way, because the gene responsible for a black coat color does not exist in the breed.

Per the AKC breed standard, acceptable Boxer colors are fawn and brindle, the base color of all purebred Boxers being fawn. Brindles are actually fawns with a brindle marking. The wording from that standard appears below:

The colors are fawn and brindle. Fawn shades vary from light tan to mahogany. The brindle ranges from sparse but clearly defined black stripes on a fawn background to such a heavy concentration of black striping that the essential fawn background color barely, although clearly, shows through (which may create the appearance of reverse brindling). White markings, if present, should be of such distribution as to enhance the dog’s appearance, but may not exceed one-third of the entire coat. They are not desirable on the flanks or on the back of the torso proper. On the face, white may replace part of the otherwise essential black mask, and may extend in an upward path between the eyes, but it must not be excessive, so as to detract from true Boxer expression. The absence of white markings, the so-called “plain” fawn or brindle, is perfectly acceptable, and should not be penalized in any consideration of color. Disqualifications – Boxers that are any color other than fawn or brindle. Boxers with a total of white markings exceeding one-third of the entire coat.

Despite the specificity of the standard, some uninformed individuals have been persuaded by unscrupulous “breeders” that black is an unusual color in the breed and for that reason, have paid top dollar for this “rare” color. Indeed, some people will insist that black Boxers exist because they’ve seen one!  In reality, what they saw was either not a purebred Boxer, or it was a very dark brindle Boxer, an optical illusion, if you will. Heavy reverse brindling can make the dog appear to have a black coat, brindling that is so dark and thick that one can hardly see any fawn beneath. Put another way, dark striping on a brindle Boxer is so concentrated that it overwhelms the fawn.

Such Boxers may be described as having a “reverse,” “seal,” or “black brindle”coat,” but only substandard breeders will try passing them them off as being black. Nor will a good breeder imply that the fawn color is “sealed” out of the black,” and thus use the term “sealed.”

Some “breeders” insist that black Boxers are “a thing” because historically, it’s “in the breed.”  They are probably referring to an accidental breeding that occurred in Germany in the late 19th century when a Boxer mated with a dog that was part Bulldog, part Schnauzer. The resulting puppies were born with black coats, and needless to say, they were not purebred Boxers. The pups were never bred, and consequently, had no influence on Boxer genetics. Black is simply not in the breed’s history.

Indeed, the Munich Boxer Club created in 1925 had strict control over the breeding and development of Boxers in Germany;  it was this group that set the guidelines for the breed standard, and that included coloring.  The club made it very clear that black Boxers would not be accepted, and defined the only two acceptable colors in the Boxer as fawn and brindle. Today, the AKC, FCI, the UK’s Kennel Club, the Canadian Kennel Club, and other reputable canine registration clubs do not register black Boxers.

Additionally, intentional breeding for heavy brindles that seem to be black is frowned upon not just by Boxer fanciers, but by any breeder with high standards. Why? Because breedings that undermine the breed standard – and that includes breeding specifically for a color at the expense of all other attributes – impact health, temperament and overall soundness. It does nothing to improve a breed, and if anything, sets it back if resulting puppies are bred.

*Boxing Day is celebrated on the day after Christmas in Great Britain, Australia, Canada, and New Zealand. It originated as a holiday to give gifts to servants, tradespeople, and the poor, but these days, it’s a shopping and sporting event holiday. The name of the holiday may have come from the boxes of gifts given to employees on the day after Christmas because on Christmas, servants worked so their employers could celebrate the day.  But why would the day be associated with sports? Because December 26 is also the feast day of St. Stephen, the patron saint of horses, and that included horse races, and in time, foxhunting, and rugby.

Image of Boxer stopped in the road by Ghislain Teillet/iStockPhoto