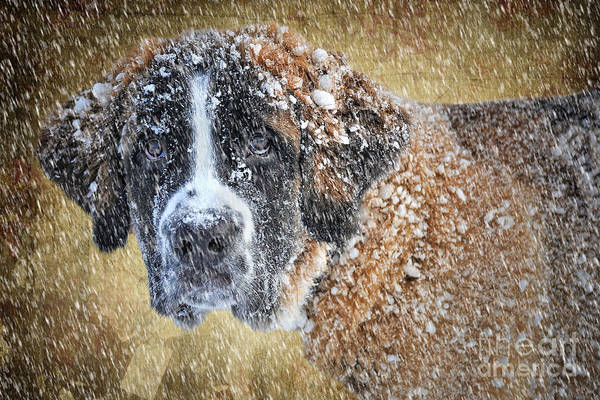 Until 1830, all Saint Bernards were short-coated.

Leading up to that year, the Great St Bernard Pass in Switzerland had suffered unusually severe weather for two years;  it convinced the monks at the Great St. Bernard Hospice to crossbreed their Saint Bernards with longer-haired dogs in the belief that longer coated Saints would be better able to survive frigid winters.

Beginning in 1830, three separate breeding experiments were conducted to cross the Saint Bernards with Newfoundlands, another breed with strong rescuing instincts. It is rumored that breedings with Pyrenean Mountain Dogs and Leonbergers also took place, but there is no written evidence to support this, not at the Hospice nor in an essay presented by Dr. E. Schmid at the 75th anniversary of the Swiss Saint Bernard Club in 1856.

In any event, the experiment didn’t end well. Ice got matted in the coat, snow and ice weighed the dogs down in blizzard conditions, sometimes killing them. Ultimately,  longer coated pups and adults were given to patrons in the valleys, and the monks worked to return the breed to its original short-coated form.

When bred, a long haired Saint only gives the rough gene as it contains two sets of the recessive coat type. Smooths can carry a recessive rough gene or be smooth dominant which can only produce smooth puppies regardless of the coat type of the other parent.  Both the AKC breed standard and FCI standard allow for a short-haired variety (double coat, “Stockhaar”) and longhaired variety.

Image: Saint Bernard by Smart Aviation is available as fine art and in lifestyle and home decor items here