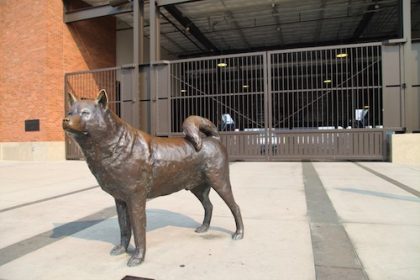 It’s annually voted to be the most scenic football structure in the nation, and is one of the loudest: Nearly 70 percent of the seats are located between the end zones, and during a game, crowd noise averages over 100 decibels. It’s also among the nation’s top 15 largest on-campus facilities with a seating capacity of 70,138.

Officially, its name is Alaska Airlines Field at Husky Stadium, but everyone calls it Husky Stadium, and yes, it’s named after the Siberian Husky. More on that in a minute.

The stadium is located on the campus of the University of Washington and has been home to the Washington Huskies since 1920. A random bit of trivia is the claim that the first spectator wave originated in Husky Stadium on Halloween in 1981 (if you’re new to Planet Earth, look at “the wave” that occurred at a Clemson University football game in 2010 in the video clip below):

There is some debate over whether Husky band trumpeter, Dave Hunter, generated the wave, or former Washington yell leader, Robb Weller, did, but whoever started it, it’s a fun tradition at sporting events. 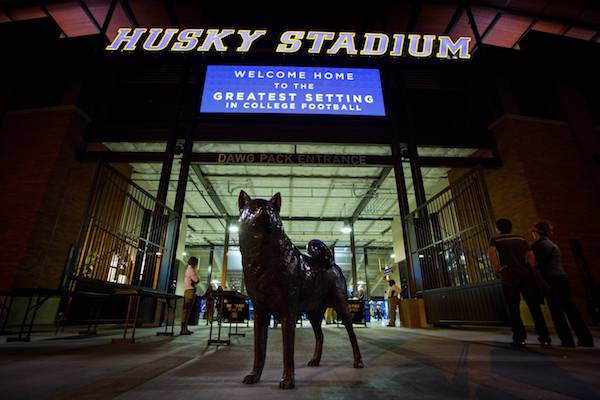 Back to the Husky. Three years after the stadium was built, the Husky was selected as the school mascot by a student committee (it replaced the “Sun Dodger,” an abstract reference to local weather). While a costumed “Harry the Husky” performs at sporting and special events, an actual dog (currently named Dubs II) leads the team onto the field at the start of games.

To what we imagine is the chagrin of Siberian Husky owning U-Dub football fans, the dog is an Alaskan Malamute, and has been since the Husky mascot appeared thirteen canine generations ago. Back in the day, “husky” was a generic term for a sled dog used in the polar regions, and the University’s thinking at the time was that the Malamute is the largest and strongest of the huskies. Given that the AKC recognized the Siberian Husky in 1930, and the Alaskan Malamute five years after that, perhaps no one challenged the school on the matter. One hundred and one years later, it’s unlikely to change now.

And this is how a Malamute statue greets attendees at the Dawg Pack entrance to Husky Stadium.

2 thoughts on “When is a Malamute a Husky?”