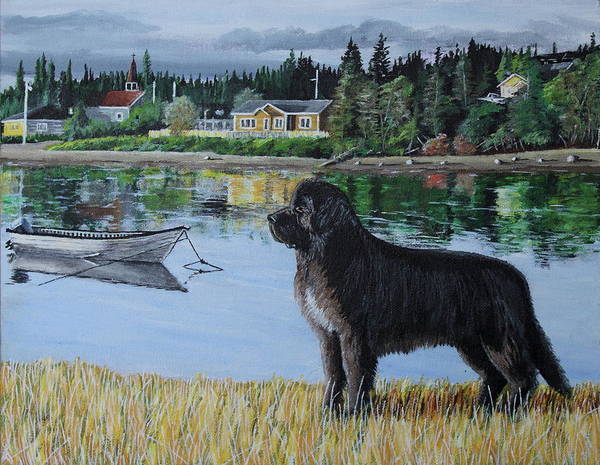 The story of the near extinction of several of the breeds we feature on these pages is all too common. Whether by war, disease, or “progress,” too many breeds came close to vanishing, and some actually did. We tend to associate the “near misses” with European breeds since two world wars occurred on that continent, but we might be surprised. One of the world most beloved breeds was driven to the edge in its own homeland, a large island off the east coast of the North American mainland, and all because of what someone thought was a good idea at the time.

In the mid 18th century, one Richard Edwards rose quickly within the ranks of the British Royal Navy. Promoted to lieutenant in 1740, by 1753 Edwards had risen to the rank of captain and took command of the Assistance. Only four years later during the Seven Years’ War, he was appointed governor of Newfoundland. During his term of office, ships under his command were active in capturing French vessels, and these prizes were an important source of revenue to both naval personnel and local officials.

Part of his mandate was to protect the island, of course, and this required Edwards to keep a careful eye on the growing number of poor Irish folk whose loyalty was thought to be doubtful. Edwards had a poor opinion of these unfortunates, but at least he didn’t ship them off to England at the end of each fishing season as his predecessor did.

What he did do in 1780, however, was to limit the legal ownership of Newfoundland dogs to one per household to promote sheep raising. Around 2,000 dogs were living on Newfoundland at the time, hauling load, and delivering milk and produce for their owners. These “black water dogs” also worked with fishermen, and were used to flush and retrieve ptarmigan in the uplands of the island’s interior. During the off season when they weren’t working, the dogs were left to roam free during the summer to fend for themselves. Not surprisingly, they developed a taste for sheep.  Under the circumstances, the administration felt it necessary to limit their numbers. Today, many historians feel that the 1780 Newfoundland Sheep Act was politically motivated; there was a good deal hostility between sheep raising colonists, and the West-of-England fishing merchants who used the dogs and didn’t welcome competition from the permanent settlers.

In the end, the move did nothing to enhance sheep farming, but because so many of the best Newfs were exported to Europe or killed during this time, it nearly drove the breed to the edge of extinction in its own homeland. A few determined breed enthusiasts ignored the law and continued breeding their dogs “underground,” and thanks to them, the Newfoundland survived. By 1824,  Newfies were thriving in Newfoundland again.

Image: “Newfoundland in Labrador” by Thom Barker is available as fine art, and as home decor and lifestyle items here

2 thoughts on “When Newfoundland Almost Lost the Newf”