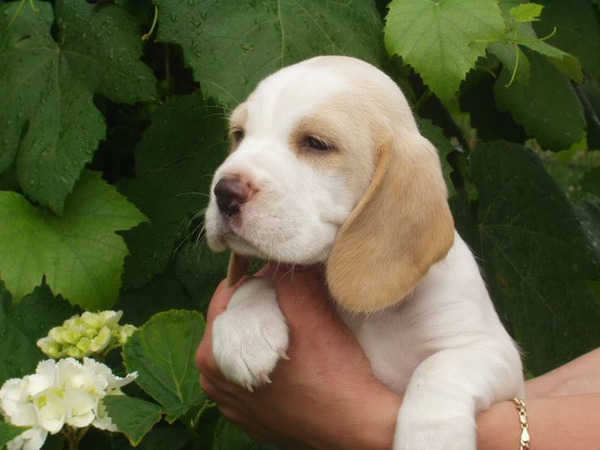 “Any true hound color” ‘is not terribly helpful to the potential Beagle owner who wants to show, and perhaps one day, breed their hound.  Unfortunately, at the time of this writing, the parent club’s section on Correct Coat Colors isn’t working, and that leaves us with the AKC’s breed page which is more helpful in that it lists acceptable breed colors and markings. One of them is “lemon.”

The most common Beagle color is the tricolor: Black, tan, and white, and the lemon Beagle (sometimes called the “blonde beagle” or “white lemon Beagle”) is relatively uncommon owing to the recessive gene it carries. They are often born so light as to appear white, and develop their lemon-colored spots as they get older. Lemon and White is another acceptable color in the breed, and these dogs have a white base coat, cream, or pure white, with yellow patches on their body, ears, face, and tail. Some say that a telltale feature of a lemon Beagle is a dark brown nose with a hint of pink. We’re not so sure about that after staring at pages of lemon Beagles.

One more thing: Lemons are not albinos.

Some lemon Beagles have golden irises, and per the AKC breed standard, a somewhat lighter-colored eye conforming to the general coloring of the dog is acceptable (but not desirable). So too, a “deep liver-colored nose conforming to the coloring of the head is permissible (but again, not desirable). We came across one opinion that lemon and bi-colored Beagles shed more than other color variations, but this could be hogwash and we’d like to hear from experienced Beagle folk privately if this has been their experience.

It’s helpful to know that within each genetic color grouping of this breed, there are “shades” of the same color, as well as combinations of color genes. Case in point: Just as there are dirty blondes, dark blonde, strawberry blondes, etc. in humans, the same holds true in Beagles. That said, there is surprisingly scant information about the genetics of a lemon Beagle, and if someone can advise us or direct us to a reliable source, we’ll happily update this post.

We did read that eight of the 3 billion base pairs of DNA that affect a dog’s coat appearance  are the Agouti locus, Extension locus, Dominant Black locus, Brown locus, Dilute locus, Merle locus, Harlequin locus, and Spotting locus. In Beagles, many of these loci are inactive. In fact, only the first five plays a significant role. Among those eight loci, the dominant black locus, brown locus, and dilute locus are the ones that affect a lemon-colored Beagle. Put another way, lemon Beagles carry a pretty unique combination of these eight loci.

If you’ve been a fan of Maymo, the famous You Tube Beagle, you’ve been watching a lemon Beagle all along. Check out a recent prank his people played on him: