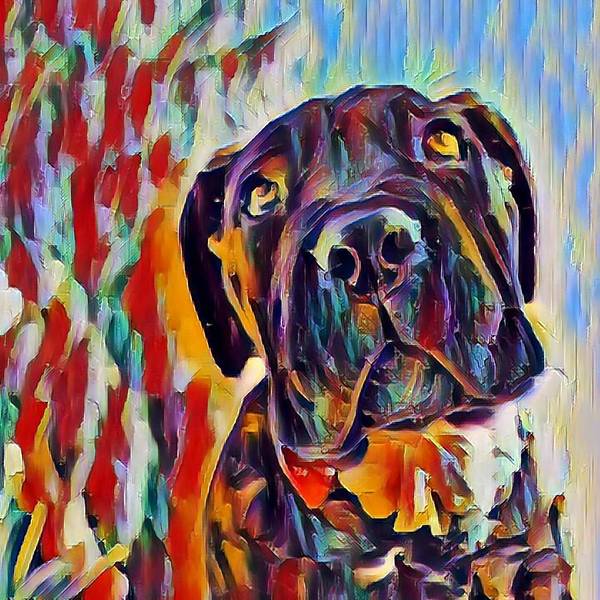 Strong. Brave. Fast. Some say even fearsome looking. A hunter, a companion, a guard dog, even catch dog.  These are a few of the words that have been used to describe the Cane Corso ——but herding dog?

In fact, the first Cane Corso came to the United States after an American attending a wedding in Sicily spotted an impressive dog herding cows along a back road on his way to the nuptials. The wedding guest, Michael Sottile, was a Neapolitan Mastiff fancier, and true to dog-person form, he got out of the car in his tuxedo, strode over to the farmer, and starting asking about his dog. The chat resulted in the first Cane Corsi being imported to America in 1988.

Corsos have always been helpmates around a farm and cattle ranches, but butchers also kept Corsos to move cattle on long trips to the slaughterhouse. They kept the herd calm, and protected it from predators; this is why in the Old Country, some still call the breed called the Italian Herding Dog.

Unlike some herding dogs that control the movements of cattle by nipping at the heels (so called “heelers”),  the Cane Corso comes at the job from a completely different direction. Literally. The dog focuses on the head of the leader of the herd, the most influential member of that herd. With threatening lunges, the Corso encourages the huge animal to change directions, and it does! The cows wants to avoid the dog because while the dog knows he’s not going to bite, the cow doesn’t. The entire herd will imitate the direction of their leader, and in this way, a Corso can alter the directional course of a lot of large animals. Writer, Desmond Morris, describes this as a clever, “cattle-herding adaptation of the ancient sport of bull-baiting” that seems unique to the Cane Corso.

There is no shortage of theories about the breed’s earliest origins, and most believe that the Cane Corso traces back to the molossoid dogs of the ancient Romans, an integral part of the Roman legions. Some cynologists, however, have argued that the Cane Corso breed may have come from an old Sicilian herding dog known as the Cane di Macellaio used to drive cattle and other animals to market.

In an article that originally appeared in 2000 in the publication, “Work Dogs,” writer Giorgio Rossi, a second generation Cane Corso owner, described how his family has always practiced free range livestock farming, and that his Cane Corso helped him with his herd of 400 heads.

That said ,the breed is not eligible for an AKC herding title, but we note that at least one Cane Corso has received an AKC Farm Dog Title.

It shouldn’t be a surprise, really. The Cane Corso is such a versatile breed that short of making su filindeu, the rarest pasta in the world, there isn’t much a Corso can’t do. And if by chance a Corso can make su filindeu, we know of three women who could use the help. They are the only people on earth who make the treat, and then, only once a year. We’ve gotten off topic, but we won’t leave you hanging. Learn more about the pasta here.

Image: Cane Corso puppy by Bonny Puckett is available as fine art and in lifestyle and home decor items here