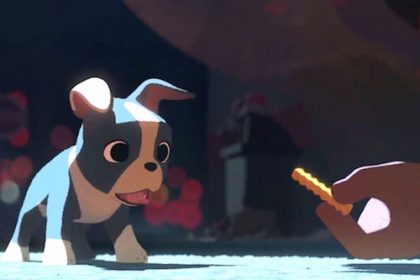 Why was a Boston Terrier chosen as the dog? Three reasons, according to different sources. Filmmakers wanted a breed that hadn’t already appeared in any prior Disney film; They also wanted a breed small enough to be able to be shown as having “graduated” to a chair at the dinner table, but then demoted back to the floor. And finally, because of the flat style of the animation, a breed was wanted that had distinct markings (like a Boston Terrier) to help cue the audience to subtle movements. Since the short was mostly made up of sequences less than five seconds long, it was critical that viewers not only be able to quickly find Winston in every single scene, but to be able to immediately read his emotions. With its big expressive eyes and distinct markings, a Boston Terrier fit the bill.

To ensure that Winston came across as an authentic dog, WDAS (Walt Disney Animation Studios) brought in a trio of Boston Terriers — Gizmo, Chibi and Swee’Pea — for animators to study.  We …”took full advantage of our time with those Boston Terriers,” the director, Patrick Osborne, said while laughing. “That scene in Feast where Winston is trying to lick peanut butter off of his muzzle comes straight from the afternoon that our artists spent watching and drawing those dogs.”