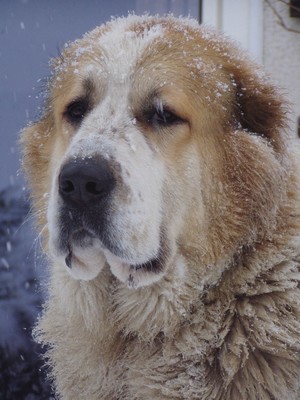 Many dog breeds native to Russia are either “Laikas” or “Ovcharkas,” and both terms cover a lot of territory. Laika means “barker,” and is used to refer to various hunting breeds from northern Russia, breeds many of us would regard as spitz-type dogs. There’s the East Siberian Laika (also the West Siberian Laika), the Samoyed Laika (which we’d just call a Samoyed), Norwegian Elkhound, (known as the Norwegian Elk Laika), the Russian European Laika, Finnish Bird Laika (Finnish Spitz) – and you get the idea.

“Ovcharka,” meanwhile, has several interpretations: The Russian word can mean something between a “livestock guardian dog,” a “shepherd’s dog” and “sheepdog,” and it, too, covers a large group of breeds in Russia, most of them a Molosser type of dog.  One breed known elsewhere as the Central Asian Ovcharka comes to the AKC as the Central Asian Shepherd Dog, a 4,000 year old Livestock Guardian Dog often considered to be the #1 most popular breed of Russia.  Said to be half polar bear and half wolf, but with the movement of a cat, Central Asian Ovcharkas were originally bred to protect livestock against large predators.  Calm yet fearless, and known to stand their ground to any wolf, Central Asian Ovcharkas have earned the nickname “Volkodav,”  Russian for “The Wolf Crusher.”

Image of a Central Asian Ovcharkas by Kučerová Jiřina via Wikicommons