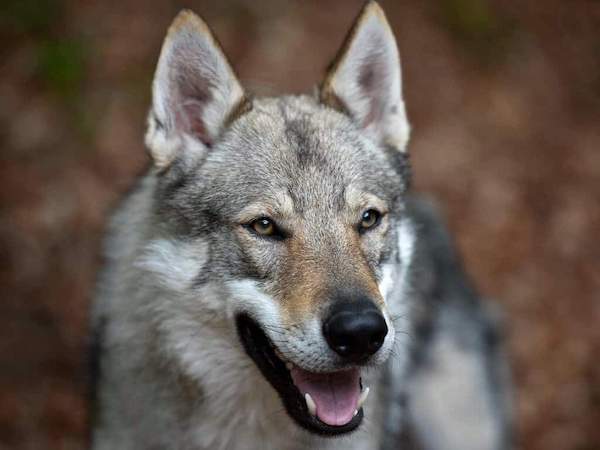 In addition to covering established breeds, we sometimes touch upon breeds that might well be recognized as purebred dogs in the future. It’s wise to remember that may of today beloved breeds were once considered landraces.

Meet the Lobito Herreño, also known as the Herreño Wolf Dog, or Herreño Shepherd Dog. Native to the Island of El Hierro, the dogs have also been found on Gran Canaria, La Palma and Tenerife, hardly a surprise as they are all part of the Canary Islands (an archipelago known as the “island of dogs” since ancient times).

These dogs have been raised by shepherds to herd goats, sheep and cattle for at least 200 years, but no one seems to know with certainty where they came from. One theory is that they arrived with the people who conquered the islands in the 15th century, another is that similar dogs lived in the area long before Europeans arrived. There is a bit more “heft” to the latter hypothesis because chaplains who accompanied Conquistadors at the arrival of the Spanish conquest wrote about the presence of “wild dogs like wolves, but they are small.” Also known is that the original inhabitants of the Canary islands, the Guanches, lived in relative isolation before the Spanish colonization, and revered dogs they called “canchas.” They mummified the dogs and treated them as holy. Certainly this strongly suggests that dogs were present in the Canaries prior to the Spanish conquest.

The decline of traditional farming on the island pushed the dogs to the verge of extinction, but happily, there are groups who have taken it upon themselves to keep that from happening. In 1989, Pérez, a breeder and trainer, started to notice how few of the dogs were around. He began a program to record their lineage, collect DNA samples, and breed them, and it was through him that the Association for the Recovery of the Herreño Wolf Dog (or AMILOBO) began studying the dogs.  According to José Juan Pestano, a geneticist from the Faculty of Veterinary Medicine of the University of Las Palmas de Gran Canaria, the Herreño is “a real breed” based on a series of samples he received from AMILOBO for analysis. The final result indicated that the mitochondrial DNA of the specimens belonged to an authentic and original breed, an authentic Canarian pre—Hispanic breed which should help grant it future recognition by clubs.

This “real” breed is described as faithful and affectionate to its master, suspicious of strangers,” and possessing an excellent aptitude as a shepherd dog for small livestock. As you can see from the photo above and the hyperlinks, the Herreño Wolf Dog is an extremely handsome breed, and one aptly named. 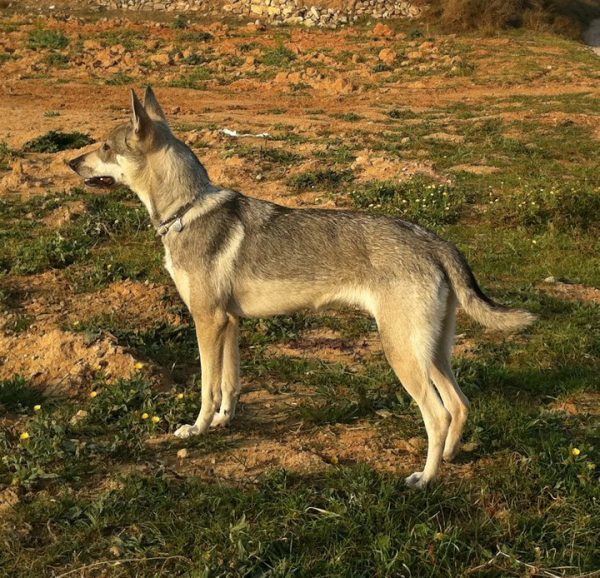 There is a breed society, the Asociación para la Recuperación del Perro Lobo Herreño (worth a “look-see” for the photos)

🚩 Below is that draft breed standard:

BRIEF HISTORICAL SUMMARY
The Herreño Wolf has its largest census on the island of El Hierro (Canary Islands, Spain), with some specimens being found on the islands of Tenerife, Gran Canaria and La Palma. The origins of this animal are not entirely clear, so it cannot be said that they were present on the islands prior to the Castilian conquest of them. Historians such as Abreu Galindo detail the existence of canids on the islands before the arrival of the conquerors.
This animal has traditionally been used for its excellent skills as a sheepdog, facilitating the work of the farmer while herding.

BEHAVIOR/TEMPERAMENT
As far as utility and temperament are concerned, these animals are used above all for their excellent aptitude as a herding dog for small livestock, faithful to their master and suspicious of strangers.

HEAD
CRANIAL REGION
Skull:
Triangular in shape, well muscled, seen from the sides and from above it forms a truncated wedge.
For both length and width, no differences are observed in both sexes; however, there are differences in the head circumference, higher in males, giving them a somewhat more robust appearance.

FACIAL REGION
Nose: The nose is generally black; however, liver-colored truffle animals are observed, being associated with the lighter or coppery layers.
Muzzle: Long and narrow
Lips: Tight, close to the cheeks, closed corners, the edge of the lips is black.
Jaws/Teeth: Jaws strong and symmetrical. Well developed teeth, especially the fangs. Bite in scissors or clamp with 42 dental pieces that constitute the normal dental formula.
Cheeks: Concise and well muscled, without noticeably protruding.
Eyes: Small, brown.
Ears: Short, triangular in shape, implanted on the back of the skull and with the pavilion oriented laterally-frontally.

BODY
Upper line: The back-lumbar line is straight, with a slight fall from the withers to the croup. Males are significantly taller than females.
Chest: Well shaped ribcage, its lower edge does not reach the elbows.
Abdomen: Gathered, giving it a slender appearance.
Tail: Wide from the base of the birth, black at the tip and dark spot in the middle of the tail.

LIMBS
FOREQUARTERS
The limbs are well plumb and have fine or medium bones, the males presenting a greater perimeter of the cane.

MOVEMENT
Harmonic, light, with a wide trot in which the extremities hardly move away from the ground. The head and neck lean towards a horizontal line.

COAT
Characteristics of the hair: The hair is short and there is a difference between the summer and winter hair, the latter being somewhat longer and thicker.
Hair color: The most common color is gray (lighter or darker), as well as reddish tones, which must present both these and gray, a light-colored mask that surrounds the mouth without reaching the dorsal region of the snout. and, a light-colored mask that surrounds the eyes; white or light cream-colored individuals are also allowed as a single color coat, not presenting in these cases a mask on the head.

NOTE: Males should have two normal-appearing testicles fully descended into the scrotum.