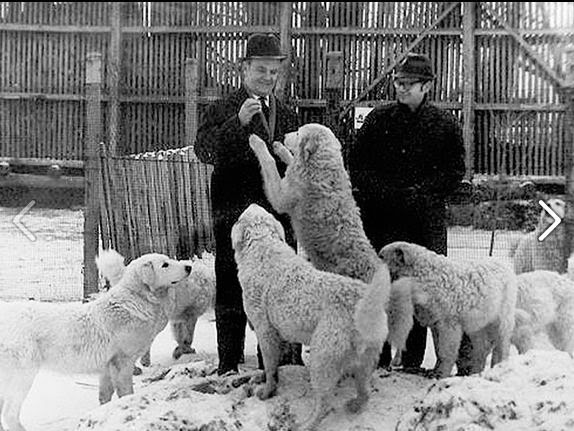 By the time World War II swept across Europe, the Kuvasz was a fairly common guard dog in the rural countryside, and that so few dogs were left after the war reveals the devastation visited upon the breed. Stolen by German police for their own use, breed numbers in Hungary were further decimated by food shortages. Occupying German and Soviet soldiers moving through the country, however, actually hunted and shot the dogs on sight because they protected their families and properties so fiercely. By the end of the war, between twelve and thirty Kuvaszok were all that was left.

When a business owner wanted a Kuvasz after the war to guard his factory, he could only find a limited number left in the country, and the individuals that did survive were disappointing. Small statures, poor pigmentation, twisted ears, terrible tail sets, and poor coats propelled Antal Kovács, director of the the Wool Traffic Company, into action. He started a breeding program under the kennel name, Gyapjús, or Woolly Kennel, and with the help of other dedicated Hungarian breeders, the Kuvasz began the road to revitalization. Kuvasz numbers began to grow, and quality improved. Some dogs coming out of the program became famous, such as Gyapjús Morcos. Interest in the breed was renewed again, but another difficult period came during the 1956 Hungarian Revolution. After that time, what followed in rather quick succession was a revised breed standard written in 1960, with FCI acceptance coming in 1963.

You can read Dr. András Kovács’ recollections about his father here.

Image is believed to be of Antal Kovács in 1953 and to our knowledge, comes without copyright from Kuvasz Klips