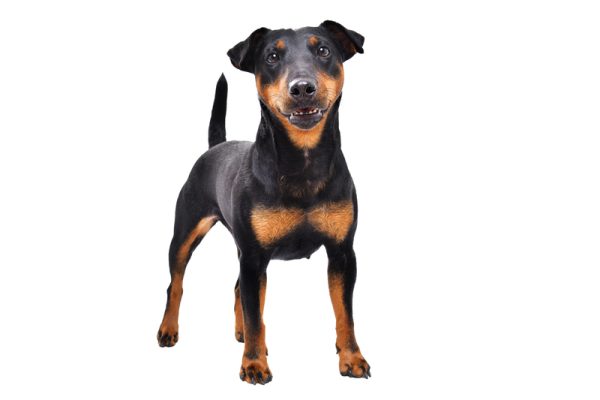 In a competitive arena, one participates by “entering” whatever it is they hope will win a prize or placement, whether it is an orchid, artwork, a concours car, or a dog.

In the lexicon of the hunt world, however, “entering” has a different meaning, and below we share a couple of examples of context:

In the aforementioned examples, “entered” means simply that a hound or terrier has been trained (and has learned) to hunt, and has successfully hunted a certain type of quarry. An entered hound is one who has completed a season’s hunting.  A terrier would be said to be entered to fox, which means they are now working foxes by either hunting their line or going into fox earths.

This is a good place to expand a bit upon a breed we mentioned above, a dog many experts regards as the consummate hunting terrier – the Jagdterrier. Extremely fearless and highly active,  the Jagd (pronounced “yack”) was never intended to be a household pet, though they are loyal dogs and bond closely with their master.

The breed was developed in Germany between the two world wars by hunters Walter Zangenberg, Carl-Erich Grunewald, and Rudolf Frieß who separated from the Fox Terrier club to create an unparalleled hunting terrier. Though the breed used to develop the Jagdterrier weren’t documented, most sources point to “Werewolf,” “Rauhgraf,” “Morla,” and “Migra,” the offspring of two hunting Fox Terriers who had inexplicably produced a litter in which all but four pups were black and red wire-haired.  Lutz Hagenberg, owner of the sire and dam, gifted the puppies to Walter Zangenberg. The hunters partnered with Lutz Heck, the curator of the Berlin Zoo and a man interested in resurrecting extinct breeds mentioned in early German mythology. His curious passion is another topic entirely.

Meanwhile, Herbet Lackner, a famous cynologist who helped breed for specific characteristics, had been working on a German hunting schnauzer breed. When he heard about the terrier project, he decided to join the aforementioned men in the creation of the new hunt terrier. Lackner carefully bred in the English Wirehaired Terrier and the Welsh Terrier,  breeds enabled the group to finally set a specific look for the Jagdterrier, its type. Selection criteria during the development of the breed was very strict, and within two decades, the Jagdterrier was a distinct breed.

Sadly, the second World War devastated breed numbers, and by 1951, there were only 32 Jagdterriers from nine litters left in the whole of Germany.  The determination of fanciers lead to an increase of the breed population: By 1956, there were 144 puppies.

The Jagdterrier was imported into the United States and Canada by hunting enthusiasts and word spread about this fierce hunter more than game to face bobcats, wild boar and cougars. The breed was recognized by the United Kennel Club in 1993, and in 2014, the AKC registered the Jagd in their Foundation Stock