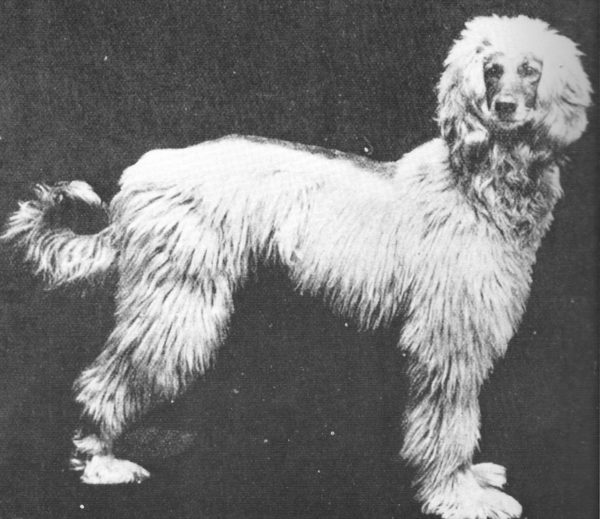 When he appeared at Crufts in 1909, he created a sensation. His name was “Zardin,” and he is now considered to be the most significant dog in the history of the modern Afghan Hound. Imported into England from India by Captain John Barff in 1907, Zardin won the Foreign Dogs class at the Kennel Club Show at the Crystal Palace in 1909, 1910, and 1911 where he was probably entered as a Persian Greyhound. He created such a firestorm of interest that Queen Alexandra requested his presence at Buckingham Palace.

Zardin was believed to have been whelped in 1902 in what is now Iran. We’ve read that what made this dog special was his superior ’attitude,’ and important attributes of type in the breed which would include his naturally proud head carriage, saddle, ring tail, sloping croup, and how his coat was patterned at the pasterns. He was the Afghan Hound who became the model for the breed,  and early standards both in England and America were based on a description of Zardin that appeared in the Indian Kennel Gazette of 1906. Zardin was later sold to a breeder named Shackleton and seems to have vanished after that. No offspring survived to carry on his bloodline, neither do we no what became of the dog. If a reader knows, please do share it with us.

The photo of Zardin seen here is all over the Internet, but we’ve learned of new photographs of Zardin with his owners that we don’t have permission to share. If anyone else does have consent, we invite you to post it below!