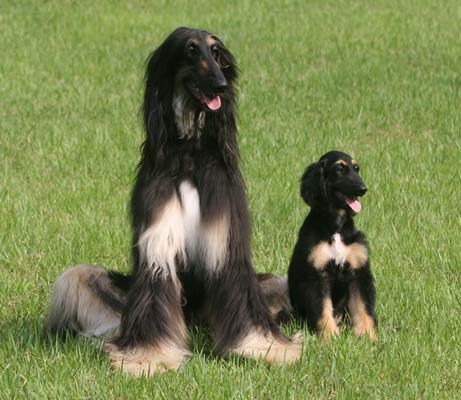 The very first clone of a dog was created from the ear-skin cells of a three year old Afghan Hound named, “Tai.” It took nearly 2,000 eggs to make 1,095 embryos implanted in 123 surrogate mothers, all of which produced just three pregnancies. One fetus miscarried, and two live puppies were born by caesarean section after 60 days, one of which died of pneumonia. The surviving Afghan Hound puppy named “Snuppy” (his name an amalgam of the institution where he was created – Seoul National University Puppy) was born to a surrogate mother (a yellow Labrador Retriever) in South Korea in 2005 by C-section. He weighed 1 lb. 3 ounces at birth

Snuppy was a sensation and was named Time Magazine’s most amazing “invention” of 2005. His reported favorite food was cake, and as an adult, he was used in the first known successful breeding between cloned canines after his sperm was used to artificially inseminate two cloned females, which resulted in the birth of 10 puppies in 2008.

In an interview, it was disclosed that as of 2008, Snuppy was alive and living in Korea. Later, however, during an interview with DOG WORLD, Sooam Biotech Labs admitted that at nine years old, Snuppy was still living in a laboratory. We hope this wasn’t the case.

Dr. B.C. Lee of Seoul National University said an Afghan Hound was chosen to clone because scientists wanted to make sure they really had a clone, and not an accidental normal pregnancy. As Snuppy’s surrogate mother was Lab, it was easy to determine that when an purebred Afghan Hound was whelped by a purebred Lab, it was the result of tinkering with Mother Nature.

Photo of Snuppy (at the right) 67 days after his birth. He appears with “Tai,” the three-year-old Afghan hound whose skin cells were used to clone him. Photo via Pinterest and credited upon receipt of information.