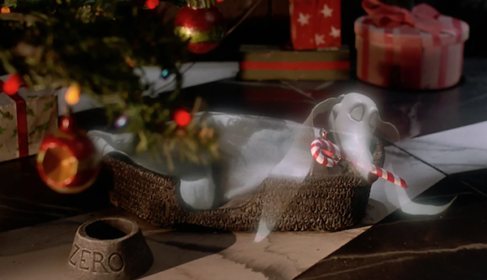 Hold on to your hat, but the iconic movie, “Nightmare Before Christmas” is 26 years old! Show of hands if you feel like it came out just a few years ago!

Back when he was an animator for Disney, “Nightmare Before Christmas” producer, Tim Burton, wrote a poem inspired after he saw Halloween merchandise display in a store being taken down and replaced by a Christmas display. Something about seeing goblins and ghouls juxtaposed with Santa and his reindeer stirred his imagination to rewrite the classic poem, ‘Twas the Night Before Christmas,’ along with designs for Jack Skellington, his dog, “Zero,” and Santa Claus.

We’re hard pressed to name our favorite character in the movies (ok, it’s Zero), but Burton’s original poem only had three characters in it: Jack Skellington, Zero, and Santa Claus. It still took animators about three years to complete the film, such is the labor of a stop-motion animated film. At its peak, some 120 people worked on the movie with 12-17 animators on the job, and the biggest fuss with Disney was over eyes. Disney wanted Jack to have friendly eyes instead of dark holes, but the producer wouldn’t budge.

Since this is a purebred dog site,  we have to talk about “Zero,” Jack’s ghost-dog and the tritagonist of the movie. Zero has a glowing pumpkin nose, an obvious Halloween pun of Rudolph the Red-Nosed Reindeer, but it’s Zero who helps guide his master  through the fog on Christmas Eve.  He is entirely loyal to his master, and despite his ghostly form, he acts like a normal dog who loves fetching bones. Unlike a normal dog, he gets them from Jack’s skeletal body. Zero is the only main character in the movie who doesn’t speak, and the only way he communicates with Jack and others is by barking like a regular dog. We don’t know Zero’s breed, in large part because he appears to be made of a white sheet like a stereotypical ghost. Some observers, however, think because of his basset hound-like floppy ears, he is – was – a hound.

Zero wasn’t Burton’s first “movie dog.” He created, “Scraps,” for the movie, “The Corpse Bride” in 2005, as well as the disturbing “Poppy” who played the part of the Chihuahua whose body was switched with his owner’s during horrifying alien experiments in Mars Attacks! (as an aside, he was also Tim Burton and then-partner Lisa Marie’s real life dog). Then there was “Abercrombie,” the titular character’s partner-in-crime in Burton’s first short film, Vincent.  Burton’s best known canine character, however, is the Bull Terrier, “Sparky,” brought back to life by his young owner after being run over by a car in the movie, Frankenweenie.