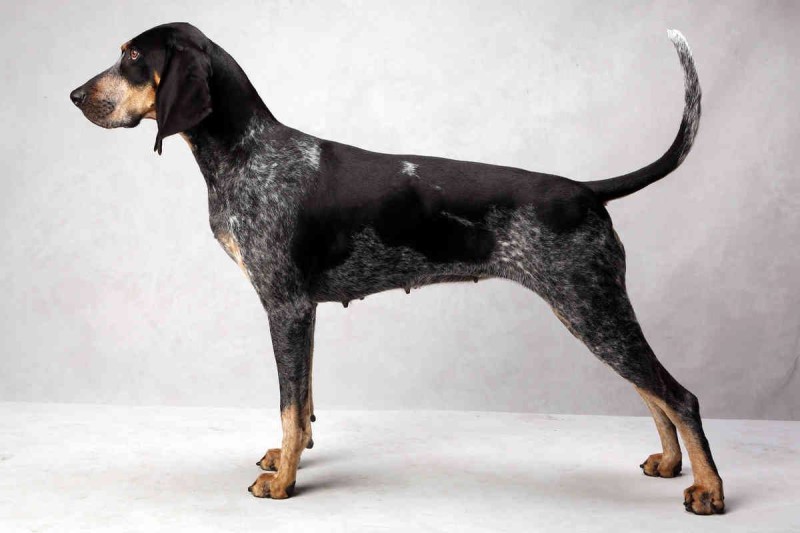 To our eye, one of the appealing parts of the Bluetick Coonhound is its prodigious tail, carried high and with a forward curve reminiscent of a half moon. Not surprisingly, this kind of tail IS called a “half-moon curve tail.” It’s said that there are four things a Coonhound loves most (besides food): Hunting, running, sleeping and snuggling. Part of the food thing would have to include an epic talent for counter-surfing. Many Coonhounds who’ve been bred to look up trees for prey often throw their heads way back to bay, and are prone to putting their front paws up on anything handy—a tree with a raccoon in it, the nearest person….or a granite kitchen counter top.

Coonhounds are said to be impish if not kept busy (Lynn Fredericks hinted that finding a 5-pound bag of pasta in the toilet when the only pulse in the house belonged to the Coonhound is not unheard of).

Image: This stunning dog is “Stella,” a Bluetick Coonhound who was Best of Breed in 2013 at Westminster KC Dog Show. Owned by Charles E. Woods and Tena Kastner, Stella’s image was photographed by Fred R. Conrad, a New York Times photographer who set up a studio at the dog show this week and invited Best of Breed winners to pose.