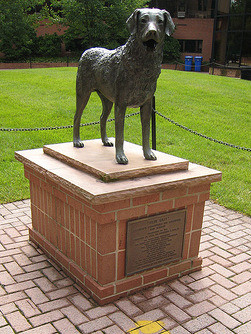 Maryland’s state pride in the Chesapeake Bay Retriever extends to the University of Maryland Baltimore County’s mascot, a Chessie named, “True Grit” who was established within weeks of the school’s founding in 1966. The athletic teams are called the “Retrievers,” and a statue of True Grit sits on campus in front of the Retriever Activities Center sports arena (tradition calls for rubbing the statue’s nose for good luck after school orientation). The University once had a live mascot upon whom the True Grit statue is based. The dog was named, “Campus Sam” and he attended many athletic events. These days, a costumed mascot does the job.