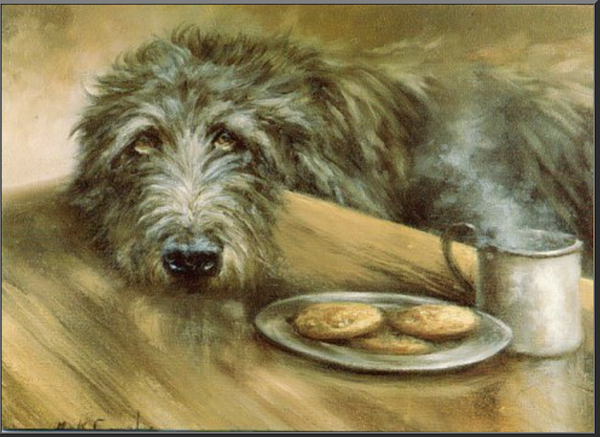 The “High Kings” of Ireland were a significant part of Irish history and mythology, men known as Ard Rí who had (if only in their own minds) lordship over the whole of Ireland. Medieval and early modern Irish literature depicts an almost unbroken line of High Kings stretching back thousands of years, all ruling from the Hill of Tara over a hierarchy of lesser kings. Any of the High Kings who lived before the 5th century AD is today considered a “legendary King,” a part of Irish mythology.

Cormac mac Airt was arguably the most famous of the ancient High Kings, and may actually have been a real person (you can read about how he became king here). He was sometimes given the sobriquet “Ulfhada” which means “longbearded,” a description that implies great wisdom. This falls in line with portrayals of Cormac as a good king, a man of his word, the “Solomon of the Ireland” whose wise decisions brought good fortune and prosperity to the country. “In his reign the rivers of Ireland were overflowing with fish, forests were difficult to travel due to the amount of fruit on the trees, and the plains were difficult to travel because of all the honey. Peace reigned supreme, crops grew copiously and cows had a massive milk yield.”

It’s probably inevitable that accounts of a larger-than-life figure who reigned thousands of years ago would come to us with a few legends attached, and one of them had to do with the pack of 300 adult Irish Wolfhounds and 200 puppies that Cormac kept at a time when only nobility could own the breed. The breed was certainly more ferocious in those days, but this was of no consequence to Cormac Mac Airt because he was said to have been raised by wolves, and could understand their speech. Indeed, his own mother was supposedly of the line of Ocl, the reflex of the Indo-European word for “wolf.”

Cormac’s Wolfhound pack was said to have magical powers, and his favorite dog of the pack was the bitch, “Bran.” She was prized for her incredible speed, courage when facing wild boars, and an almost supernatural knack for warning her people of enemy attacks. When she was stolen by a servingman who intended to sell her in Britain, Fionn MacCumhaill, Cormac’s “kennel man” rescued her. And here is where things get confusing.

There are numerous legends of Bran and another wolfhound, “Sceolan,” whose stories are intermeshed with Fionn MacCumhaill, but this “Bran” is a male. We are sorting out the different “Brans” who appear in Irish mythology and history, and until we report back on what we find, we leave you with a curious coincidence: Before the arrival of (saint) Patrick in Ireland, Cormac mac Airt – legendary Wolfhound owner – was said to be only the third man in the country who ever heard of the Christian Faith.  Patrick also had an almost mystical way with Irish Wolfhounds.

We close with Alma J. Starbuck’s book, The Complete Irish Wolfhound, in which the author writes that the story of “the Irish Wolfhound, ‘like all Gaul,’ may be divided into three parts: The data regarding the ancient wolfdog with his romantic historical background; the extra­ordinary feat of Captain G.A. Graham in reviving the breed in the nineteenth century; and the dog among us today.”  Every aspect of the Wolfhound’s history is interesting, but as we see it, little can compare to the legends handed down over thousands of years.