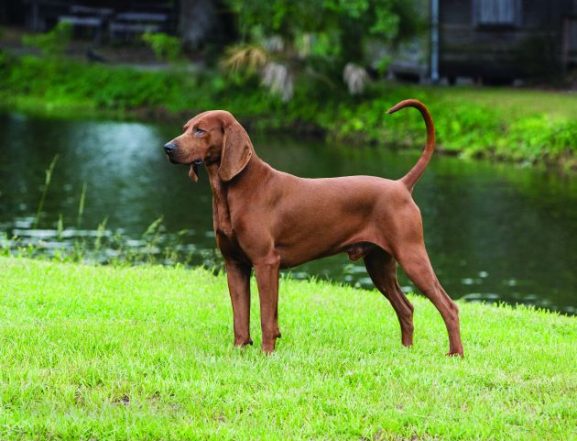 Though it wasn’t always so, coonhound events are “mainstream” now in the sense that the AKC acknowledges the legacy of Coonhounds with their Coonhound Events Program. Would you care to guess which of the events included in the program (nite Hunts, Hunt Tests, Field Trials, Water Races and Bench Show) is the most popular?

Once known as “wild coon hunts” in the 1950s, nite hunts are the most popular event in the program, and it’s one of the only AKC competitive sports where dogs hunt in a natural setting.

Seven coonhound breeds can participate in the events today, but in the early days of such hunts, one breed stood out, the Redbone Coonhound. The first dog to achieve the title of UKC Nite Champion in what has become a signature event in modern coonhound competition was a Redbone Coonhound named “PR Strong’s Red Bud.” Born in 1949 in Miamisburg, Ohio, Red Bud was owned by Carlos Strong and earned his title on June 6,1954.

He wasn’t the first to distinguish the breed. In 1927, a Redbone named “Little Sheik” won the inaugural field trail, “Leafy Oaks,” which endured as the premier event of its type well into the last decade of the century.  The source for that bit of information is the AKC itself, but it should be said that not all sources agree with this. Some say that the first Leafy Oak (the first major coonhound Field Trial of all time)  was won by an English Coonhound called “Bones,” owned by Colonel Leon Robinson.

Redbones, some say, became more popular as companion dogs than perhaps any other coonhound breed, and Wilson Rawls’ book, “Where the Red Fern Grows,” helped.

The Dachshund is probably our favorite breed to cite when talking about form following function, and we love one particular way the dog's design has been described....
...