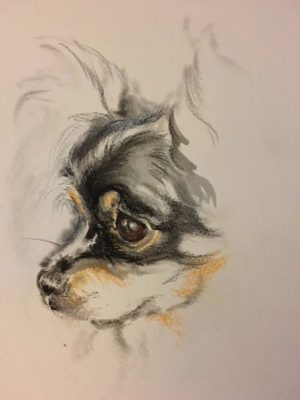 The Chihuahua was recognized by the AKC in 1904, and the first three Chihuahuas registered were long coated dogs. This is interesting not only because the two coat varieties weren’t recognized until nearly fifty years (it happened in 1952), but also because the long coat gene in this breed is recessive to the dominant smooth coat gene.

Long haired Chis were already well known by the late 19th century, something we learned from James Watson, an author and judge who owned a long coated Chihuahua named “Manzanita” in 1888.  Watson had immigrated from Scotland to New York in the 1870s, and it was while he was traveling to San Francisco to attend a dog show that he stopped in El Paso and crossed the border into Mexico to investigate rumors of a tiny breed. There, he purchased Manzanita from a Mexican merchant for five dollars (which in today’s market, could come to about $133.03).  Not long after, Watson wrote a piece about his new dogs for The American Kennel Register and Country Life in America and described them as dogs small enough to fit in his pocket. One can imagine how captivated readers were to hear of dogs this small. Curiously, most of the imports in Watson’s day were long coated dogs, and not the more dominant and popular smooth coat.

Color genetics is fascinating to a lot of people (black is the most dominant color in this breed, genetically speaking, and we’re told that pure white is the rarest color of all),  but others find the genetics behind the length of a dog’s coat to be at least as interesting. We can tell you that the length of a Chihuahua’s coat is determined by two genes, and that two smooth-coated Chihuahuas can produce a long-coat puppy if they each have the long-coat gene. Because the long-coat gene is recessive, two long-coat Chihuahuas cannot produce a smooth-coated puppy.  If a pup inherits a smooth coat allele from either parent, it will be a smooth. The dominant smooth coat gene, if present, will hide the recessive long coat gene.

We came across a source that states that long coated Chihuahuas have a gentler temperament than those with a short coat, but we prefer to hear this sort of thing from the experts – those of you who’ve had both coat varieties. What say you?

One thought on “The Chi’s Recessive Coat”