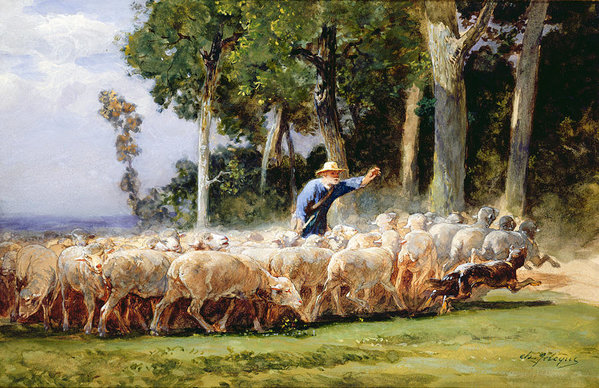 Called by many  ‘the King of Sheepdogs,’ the Beauceron is certainly the largest of the French sheepdogs. With no foreign crosses in its history, it is a purely French breed, and a very old one. Its earliest origins are thought to date to at least 1587 when a passage in an ancient manuscript from that date first mentioned a dog fitting the Beauceron’s description.

While it’s commonly believed that the breed originated in France ‘s Beauce region, some experts give more weight to the breed having originated from a family of shepherding dogs found all through France, and not just the plains of the plains of La Beauce. By the early 1800s, a common sight throughout France were large flocks of sheep, and equally common were the dogs that tended to them.  It was a priest, Abe Rosier, who in 1809 wrote an article on these French herding dogs, and it was he who first described the differences in type and used the terms Berger de la Brie (or Briard) and Berger de la Beauce (Shepherd of the Beauce) or Bas Rouge (Red Stockings).

A versatile and superior worker, two Beaucerons could easily tend 200 – 300 head of sheep, and in the course of a typical work day, they might travel over fifty miles guiding their charges, but also protecting them from wolves or bears.  Thirteen of the dogs appeared at the first dog show in Paris in 1863, but they were still regarded as working dogs, not show dogs. It would be nearly twenty years later that the Society Central Canine was founded, and in 1892 the first Bas Rouge was registered, a bitch named  Bergere de la Chapelle. She would on to win the title of, “Champion of Beauty,” and by then, her breed was known as “Beauceron,” the name coined by Pierre Megnin, a veterinarian and professor of zoology who used “Beauceron” in a book he wrote on war dogs in 1888.  Assisted by M. Emmanuel Ball, Megnin started to define the standard of the breed, as well as help form the Club des Amis du Beauceron in 1922.

Over time, sheep production in France declined, and between that and the new practice of penning herds,  the need for sheepdogs plummeted. The CAB’s response was to “repurpose” the breed and promote it for other tasks that utilized its skills. The French army used Beaucerons to detect mines and trails, and deliver messages along the front lines. The breed’s ability to follow commands unhesitatingly was well used during both wars in Europe, and it didn’t fail to impress. After the war, the breed’s popularity spread to Holland, Belgium and Germany.

Today, Beaucerons are wonderful companions, and they are still used as military dogs as well as police dogs. The breed’s versatility sees these dogs excel in activities ranging from herding, Schutzhund and tracking, to obedience, French Ring nose work, and Search and Rescue. The Beauceron was recognized by the FCI in 1963, the United Kennel Club in 1994, and the AKC in 2007. In 2008, the Beauceron made its debut at the Westminster Kennel Club Dog Show.

Image: A Shepherd With A Flock Of Sheep by Charles Emile Jacques is available as wall art, home decor and lifestyle items here