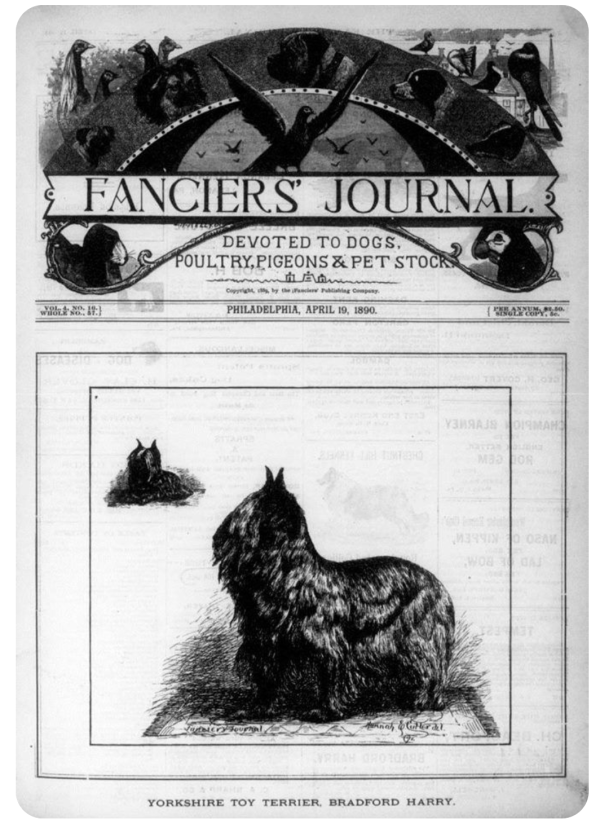 Harry Bradford is a prize-winning conductor and choral director based in London. A recent graduate of the Royal Academy of Music, he was awarded the Academy Alumni Scholarship for a ‘singularly distinguished studentship,’ among many other prizes and awards. He was the youngest finalist at the ‘International Competition for Young Conductors’ in Paris, 2019, and just in this year so far, he has been chorus master for a performance of Vaughan Williams’ Sea Symphony under Dennis Russell Davies, and also lead the Thames Philharmonic Choir in a Come and Sing Performance of Mozart’s famous Requiem.  It’s hard to square such achievements with one who has the youthful look of a cherub.

For the purposes of this post, however, we’re going to flip the tables by flipping the name. We’re going to talk about Bradford Harry, the first Yorkshire Terrier champion in the United States.  This Harry was also bred in England, but in 1885, and before even touching American soil,  Harry had won first prizes at Newcastle and Darlington in the UK.  The Yorkie was imported from England by Peter H. Coombs of Bangor, Maine, and started being shown in the US in 1888. Within two years, he had won every special prize for which a Yorkie was eligible to compete at the shows where he was exhibited, including nine first prizes. It could never happen today, but at one show, Harry won the special prizes for the Best Yorkshire Terrier, the Best Rough-Coated Terrier of any breed, and the Smallest Dog in Show.

It isn’t surprising that Harry was a direct descendent (a great-great grandson, in fact) of Huddersfeld Ben,  the dog described by one authority as the best stud dog of his breed during his lifetime, and one of the most remarkable dogs of any pet breed that ever lived. Ben, in fact, was one of the first dogs to breed true to Yorkshire Terrier type, and is credited with siring most of the foundation stock for the breed.

Ben was owned by Mrs. Mary Foster, the most prominent early breeder and exhibitor of Yorkies, and also the first female judge in England. It was she who sold Harry to Peter Coombs, but Coombs, himself, was a well-known early breeder.  Curiously, Coombs used as his kennel name the same kennel name that the Fosters had used in England, and some think he probably adopted the prefix when he imported Bradford Harry.

Coombs wrote the first American article to have been written at length about the breed; it appeared in, “The American Book of the Dog” published in 1891, and had incorporated parts of an article written in 1877 by Mr. Wilkinson (an early Yorkie fancier) for The Stockeeper.

At this point, serious students of the breed may be thinking, “Hold on, here” as the second paragraph catches up to them.  Was Harry really the first AKC champion?

Although there had been earlier AKC recognized champions in the breed, Coombs was able to claim that Ch Bradford Harry was the first champion of record because of a change that altered the rules for becoming a champion when the AKC was founded. Most of the rules remained the same, but there were conditions: A dog had to be registered with AKC or be listed with AKC to be shown. A dog having won a title prior to the new rules could become champion of record if that champion was then registered with AKC, otherwise it couldn’t be called champion of record.  The rules for becoming a champion of record were passed in 1893 and took effect on January 1, 1894.  Furthermore, a dog had to win four first prizes in the open class after which it was eligible to compete in the challenge class.  The dog was a champion when it had won three first prizes in this class.  A dog now became a champion of record based purely on the fact that these wins and his championship were now recorded in the AKC Gazette. As it that wasn’t confusing enough, a further qualification was made in 1895: “A dog having won 3 first prizes in the challenge class, one of which shall have been won at a show offering not less than $1000.00 in cash prizes shall have the privilege of the title champion.”