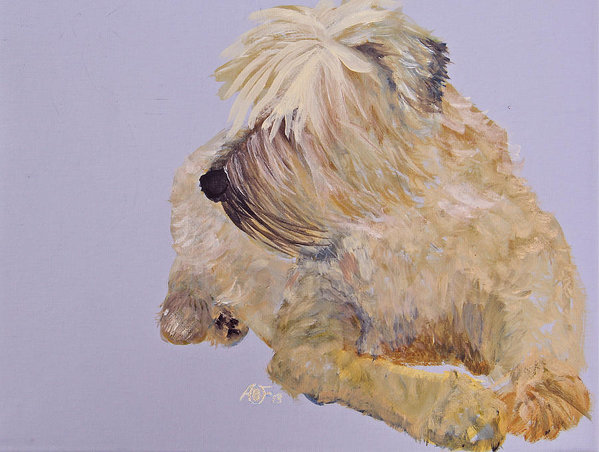 In ancient Ireland, only landowners could own a spaniel or a hound (Irish Wolfhounds, Beagles, Greyhounds, etc.), which is why, until the 1900s, terriers, including the Soft Coated Wheaten Terrier, were the poor man’s dog.  Wheatens in particular were a farm’s Jack of all Trades: Rid the farm of vermin, guard against four and two legged intruders, do a little hunting, herd a sheep or two, and keep the master company. Like a few other working dogs, the Wheaten’s docked tail told the tax collector that s/he was exempt from the tax on dogs.

When the Wheaten was recognized as a breed by the Irish Kennel Club in 1937 (on St. Patrick’s Day!), the club bore in mind the breed’s working roots, and thus, to earn a championship title, Wheatens were first required to earn a Teastas Mor, a certificate of gameness earned by qualifying in field trials with rats, rabbits, and badgers (the rule no longer exists).  The breed differs from most other terriers in that his coat is soft, rather than hard or wiry, but these can be hard-muscled working terriers which has  earned the breed the description: An Iron Fist in a Velvet Glove.

As an aside, the American Working Terrier Association founded in 1971 holds den trials across the country throughout the year at which terriers (and Dachshunds) can earn a Certificate of Gameness. The association’s mandate is to encourage terrier breeders to retain the hunting instincts that make their various breeds characteristically “terriers,” but oddly, the Soft Coated Wheaten Terrier is not among the breeds recognized as eligible for competition in den trials (see the list of accepted breeds in the second paragraph here).

“Madigan,” a Wheaten Terrier by Amy Fissell is available as a print, poster, tote bag and more here.

4 thoughts on “An Iron Fist in a Velvet Glove”