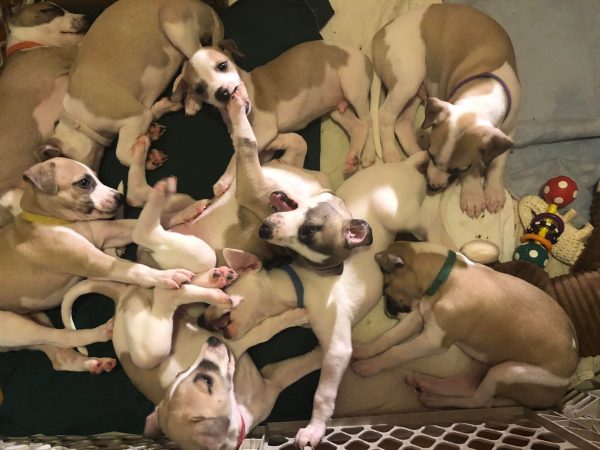 “Detroit recently launched a Whippet Wipe-Out campaign after a man jumped a river bridge as it was opening while intoxicated with Whippets. “

Gasp. We were outraged to think that anyone, let alone an American city, would try to obliterate a breed wholesale. In scanning the article,  things got worse as we looked at bullet points:  What are Whippets and are They Dangerous? Are Whippets Bad for You? Negative Health Effects of Whippets. How Do People Do Whippets?

This was bad. Really bad. And then we actually read the article. Whippets, it seems, is the name of psychoactive drug classified as an inhalant. People who use whippets inhale nitrous oxide from tiny cartridges. That is a subject for an entirely different site. We can’t help but chuckle, however, at Whippet owners reading the bullet point questions and coming up with their own answers. Cheeky little Whippets comes to mind.

A hound that is “the middle kind betwixt the Harrier and the Greyhound that is swift running, follows the game with eagerness and taketh the prey with a jolly quickness.” That is what Dr. John Caius wrote in 1575 in De Canibus Britannicus when describing the breed we know as the Whippet. The first written English use of the name, Whippet, with regards to the breed, however, didn’t come for another thirty-five years (in 1610).

As to the origin of the name, theories abound.

We’ve shared on these pages before that the fabulous dog writer, Bo Bengtson, wrote, “Although the word Whippet (or corruptions of it) was recorded as early as in the sixteenth century, it did not necessarily mean then what it does today. The Oxford Dictionary of English defines a Whippet in 1550 as “a lively young woman; a light wench.”

One etymologist, however, suggested that the earliest origin is the word, “via,” Latin for “road,” and the root of words like vibrate, convey, wiper – – – and whipper, now an obsolete English verb meaning to “move briskly.” It morphed into the slang term, “whip it,” meaning much the same thing: Move it!!

A late entry into the origins of Whippet (which is to say that we just found it) is that the word originated from the word, whappet,” which meant a small dog that wapps (or yaps).  As Whippets were very noisy while waiting impatiently for their turn to race, it’s tempting to think this was the origin of the breed’s name since we know that as of the 17th century, Whippets were being bred to run.

As an aside, the word, Whippet, is also surname. It was first found in East Devon at Whimple, a village and civil parish which dates back to the Domesday Book of 1086 where it was listed as Winple, a name that came from a stream that ran through the area as in the Celtic name meaning “white pool or stream.”  In the United States, the Whippet family name was found in the 1880 census showing that five Whippet families lived in Connecticut. Indeed, 100% of all recorded Whippets in the country were found in Connecticut.

It must be a Friday when we start a dog-related post with a psychoactive drug and end with a family name.

Image of Whippet youngsters (playing Twister?) is shared with the kind consent of their owner, Sharyn Yetter Hutchens.