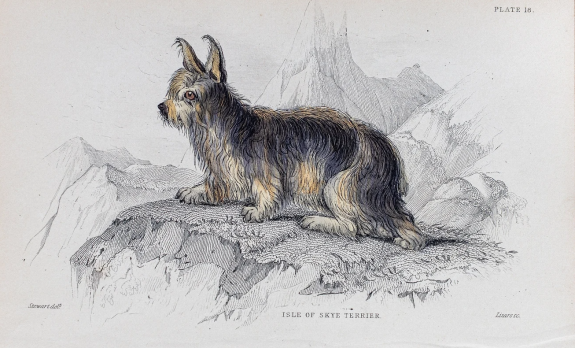 Most of us would be hard pressed to identify the creature in the image as a dog, let alone what breed of dog, but in 1840 when this engraving was made, this was how animalia was portrayed: Stylized to the point of being unrecognizable, and somewhat sentimental.

It could have been worse.

Positioning taxidermied animals in human settings and scenarios was a popular art form in the Victorian era.  This is how (allegedly) we came to have images of ice-skating hedgehogs, rabbits sitting at desks in a classroom, and a wedding attended by kittens decked out in highly detailed garb (we say “allegedly” because we couldn’t actually find any of these images on-line).

Still, reliable sources document the validity of the image you see here, and why it is noteworthy is because it is the first known image of a Skye Terrier. It appeared in Volume XIX of Jardine’s Naturalist’s Library in 1840 (another source puts it at 1843).

Was it a coincidence that the picture came out a year after a Skye Terrier was acquired by Queen Victoria who started breeding Skyes in the Royal Kennels?

Probably not, but if it didn’t happen under Queen Victoria’s influence, it would have happened under Queen Alexandria who also owned the breed and was an active fancier.

The breed was recognized by the American Kennel Club in 1887, and that same year, the first Skye Terrier was registered by the AKC, a bitch named named “Romach.” It would be 50 years before the Skye Terrier Club of America was founded (in 1938). Since the breed is known to be the oldest terrier breed of Scotland going back to at least the fourteenth century, we have to wonder: What took them?

Image: Isle of Skye Terrier from “The Naturalist’s Library” by Sir William Jardine Vol. X Mammalia – 1840 is offered by EngravingsandLithos and is available here.