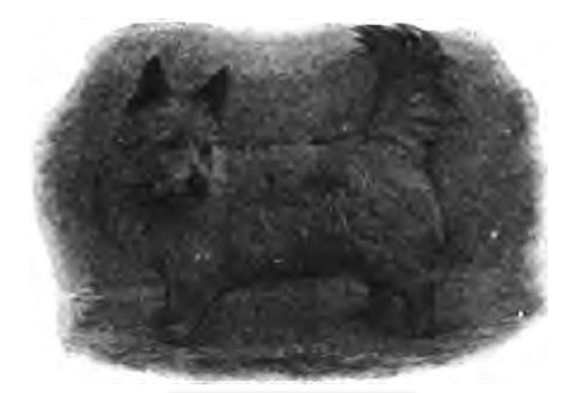 Over the years, we sometimes cover the same topic more than once, usually because we’ve come across more (or different) information about that topic. The Pittenweem Terrier is one such subject.

A few years back, we did a post explaining that the “Pittenweem Terrier” was the name once given to a line of white Scottish Terriers developed by Dr. America Edwin Flaxman. We mentioned why it was that Dr. Flaxman concluded that white was an ancient color trait in the breed that was attempting to force its way back out (it conjured up images of the chestburster scene from the movie, “Alien.”)

Among the cast of characters in the Pittenweem chapter were the 8th Duke of Argyll and Edward Donald Malcolm. The Duke was breeding a solid white strain of Scottish Terriers known as Roseneath Terriers, while Malcolm was creating the breed eventually known as the West Highland White Terrier.

After producing more than twenty white pups (and coming to the conclusion that he did about the color), Flaxman reached a point where he thought he had created a distinct breed, the Pittenweem Terrier. Keenly interested in the opinion of fellow breeders, Flaxman invited Colonel Malcolm to inspect his new Pittenweems (and perhaps, we speculate, hope that Malcolm would be impressed enough to use some of the Pittenweems in his own breeding program).

It wasn’t to be. Though author, Edward Ash, stated in his publication, The Practical Dog Book from 1931, that crossings took place between Col. Malcolm’s dogs (called Poltalloch Terriers at the time), and those bred by Flaxman, in reality, Malcolm was not impressed by the dogs and felt there was too much Scottie in them. He wasn’t wrong. Pittenweem Terriers were white, of course, but they closely resembled the Scottie with a larger head. Another source points out that nose color was a difficulty with the white terrier, namely, they had flesh-colored noses, though later dogs were said to have jet black noses.

It didn’t matter in the end. It is a heavy burden to put on someone’s shoulders, but one source writes that Malcolm’s rejection of using Pittenweem Terriers in his breeding program led to their decline, and ultimately to their extinction.