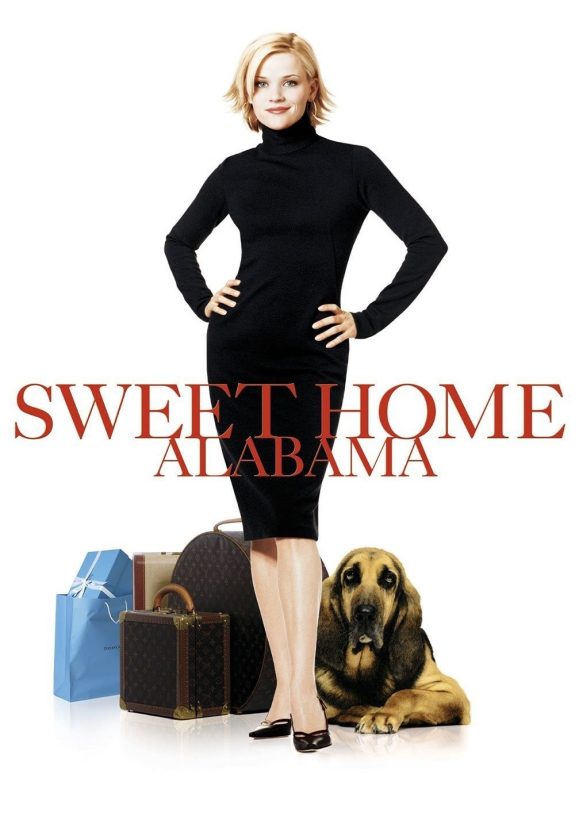 When a dog appears on the cover of a DVD, you might assume that the dog factors into the plot of that movie. With Sweet Home Alabama, you wouldn’t be wrong.

We are introduced to two Bloodhounds in this film, one in memory only. The late “Bear” was the dog owned by “Jake” and “Melanie” when they were still a couple. At some point, Melanie left her small Alabama town to find success in New York City as a fashion designer, but returns home to get divorce papers signed. To share any more of the plot will spoil the movie for someone thinking of watching the RomCom made in 2002.

“Bryant” is Jake’s current Bloodhound, and it will come as no surprise to read that we think he’s the star of the movie.  You can see (and hear) him in the 48 second video clip below:

“Bryant” (named in tribute to legendary football coach from the University of Alabama) is played by “Baron,” and part of the scene not seen in the clip above is when Bryant dives into a lake to fetch a toy. When the dog fails to resurface, both Melanie and the audience grow concerned (spoiler alert ahead), but he does after having stayed under for a considerable length of time.

When Bryant’s head finally breaks the surface, we are relieved – and fooled. The head was actually a realistic Bloodhound replica created for the water scene by The Character Shop, experts in fabricating animatronic animals, puppets, robots, creatures and more. Production manager, Sara White, and the movie’s dog trainer sent pictures of the real “Baron” to Character Shop puppeteer artists where they created the duplicate. You can see the different stage of creating Bryant’s head here.

Unfortunately, information about Baron is scarce, and it continues to frustrate us that too many movie producers and directors don’t provide more information about the dogs that appear in their films. If anyone is able to shed more light on the Bloodhound actor, Baron, we’d love to have it.