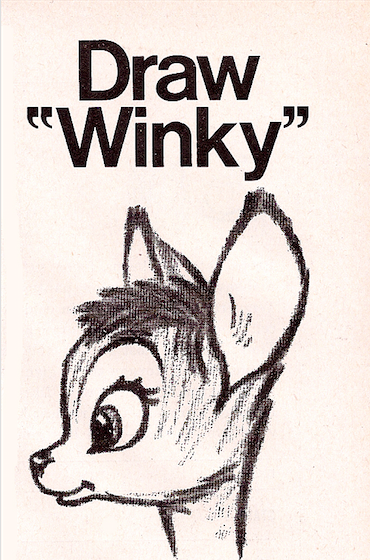 Folks of a certain age, remember this drawing at the left? It was usually found in the back of popular magazines, or inside match covers, and the accompanying text said that if you could draw “Winky” in any size, you could win a scholarship from Art Instruction Schools, Inc. to attend commercial art school! To our knowledge, no one ever got a scholarship, though people who actually sent in their drawings got encouraging letters explaining that while they didn’t get a scholarship, they could improve their drawing skills by taking classes from them.

Then there was John Gnagy, a self-taught artist who pioneered drawing on television in the United States from the early 1950s throughout the 1960s on his program, Learn to Draw.  His program, You Are an Artist, was the first “act” on the first television program broadcast from the antenna on top of the Empire State Building. His popular art kits were sold by the millions (15 million by 1986, to be exact – and they’re still being manufactured by the Martin F. Weber Company).

Most people, however, may better remember Bob Ross whose half hour instructional TV show, The Joy of Painting ran for nearly twelve years. In each episode, Ross taught techniques for landscape oil painting,  his mesmerizing voice lulling many of us into the best nap we’d had in years. Watch a few minutes of the video below to better appreciate the video that follows below it:

In an “homage” to Bob Ross (including the hair), Crusoe, the Celebrity Dachshund, offers his version of The Joy of Painting below:

Are you all still awake??