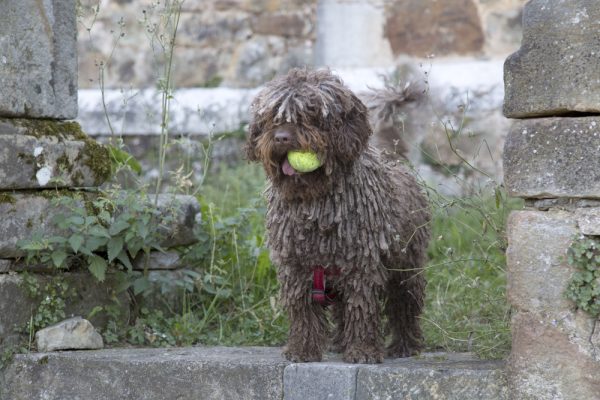 An old airport joke says that whether you go to heaven or hell, you’ll have to change planes in Atlanta.

Not that the country is heavenly or hellish, but it seems a few breeds passed through Hungary to get to their final destination, too.  Among them are the Polish Lowland Shepherd Dog and the Spanish Water Dog. This post touches upon the latter.

As an aside, some believe the Spanish Water Dog to be the oldest of all the water dogs (Barbet folks may argue this point), but it is in the AKCs Herding group, not the Sporting Group. The Spanish Water Dog was initially in the Sporting Group, but after a request from the Spanish Water Dog Club of America, it was moved to the Herding Group in 2011. The reasoning may be found in source that indicates that as of 1110 AD, the SWD was used in the Southern Iberian Peninsula as a herding dog to move goats, sheep and other livestock, its talents as a water dog not utilized for a very long time.

That said, and despite the breed’s name, its exact origins aren’t known with certainty, nor is there a shortage of theories.

Some postulate that the breed’s ancestors were wooly-coated water dogs originating in North Africa. From there, Moors brought the dogs to the Iberian Peninsula when they first occupied it in 710 AD.  The breed might have Turkish roots since at one time, it was known as Turco Andaluz, or Andalusian Turk. The dogs may have come with Turkish traders, or, perhaps more likely, arrived in Turkey with Merino sheep from Hungary which was occupied by the Turks at the time. In 1989, Santiago Montesinos (one of the founders of the Spanish Kennel Club)  cited a theory that the Spanish Water Dog’s origins were in Turkey and Hungary, and noted the similarity of the hair cording like the Hungarian Puli. The year before, Flores also expressed his belief that the Spanish Water Dog was the same dog as the Perro Turco (Turkish) referred to in the 10th century.

But wait, there’s more! In 1993, De las Rosas postulated that the breed descended from an Asian breed, or perhaps a direct descendant of canis familiars palustris from which all European water dogs are derived.  Another theory is that these dogs might have come with different tribes of barbarians that invaded Europe after the fall of the Roman Empire.

We may never know with certainty, but it wasn’t until 1975 that the breed emerged from obscurity by enthusiasts eager to establish it as a Spanish national breed. In 1985, just ten years later, the Spanish Water Dog was recognized by the Real Sociedad Central de Fomento de Razas Caninas en Espana. It was presented to he American Kennel Club as a rare breed in 2000, and included in the AKC Foundation Stock Service in 2005.  In 2008, the breed was accepted into the miscellaneous breed category and then moved to the herding group in 2015 where it remains today.