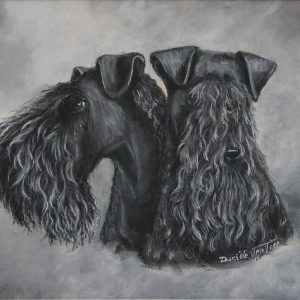 We suppose the debate over Ireland’s true National Dog will always be a source of contention, but it seems undisputed that the country’s National Terrier is the Kerry Blue Terrier. It was rightfully named after the County of Kerry in South West Ireland, but its gameness and stature lent some to nickname it, the “Blue Devil,” a name it earned in early dog shows when the Irish Kennel Club required dogs to pass a “gameness” test before being judged.

In the early 1900s, Irish patriot Michael Collins introduced legislation to name the Kerry Blue the National Dog of Ireland (his own Kerry Blue named Convict 225). Collins was murdered, however, before the legislation could be passed, and after his death, interest in the initiative was lost.  The breed’s final name was established in 1922, a change from when it was known as the Irish Blue Terrier (Brocaire Gorm, in Irish) or Blue Terrier.