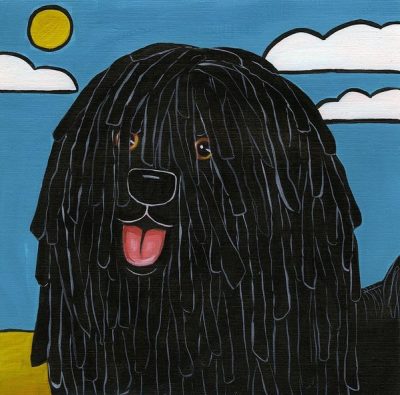 Back in 1966, a research scientist and expert on Hungarian dog breeds, Dr. Ocsag, presented to the World Kynologic Congress a technical paper that shared the results of a study he performed on the Puli coat. He categorized the coat by texture, and specifically into seven grades that included narrow cords, flat cords, cords resembling shoe-laces, heavy, very wide, mat-like cords, and even, rounded cords. All are correct within the standard since to initiate cords, a coat must have a proper balance between undercoat and top coat. Without that balance, the coat will fail to mat and cord on its own, and instead be an “open,” silky coat wholly inappropriate for a working breed. Back in the day, there was contentious debate over whether the coat should be brushed or corded, some people believing that it was dirt that kept the form of a cord (eeek). According to the late Les Benis, author of This is the Puli, some individuals even asserted that combing a Puli changed their biochemical balance!

It’s charitable to remember that at the time, the breed had been in the United State less than thirty years, and that American Puli owners in the breed’s early days here had very little access to information and historical documents, let alone other breed owners from the country of origin.  Contact with anyone in Hungary, a country ravaged by occupation and war, was restricted by the Soviet regime. A corded coat was unfamiliar to those early owners, and consequently, Pulik were brushed and combed out because that’s what was done with heavily coated dogs at the time. Eventually, Hungarians who made their way to the United States brought with them insights — and sometimes their dogs, — which helped change how the breed was presented, and one such person was Les Benis, the aforementioned author, and an eventual AKC judge. Given that the number one dog in the country at this writing is a fully corded Puli, it’s astonishing to realize that the first corded Puli to win a Best in Show in America came a very long 35 years after AKC acceptance.

In time, the rest of the world discovered the “fun” of a corded coat:

The video above was created by Zebbie and Kimba Puligan Mancunian and published by the Puli Club of America. It was first filmed on GoPro, edited on GoPro Studio, and exported ‪GoProPuli‬ video.  It was filmed within 15 minutes.

Hungarian Puli in folk style by Leanne Wilkes is available as a print, pillow, phone case and more here