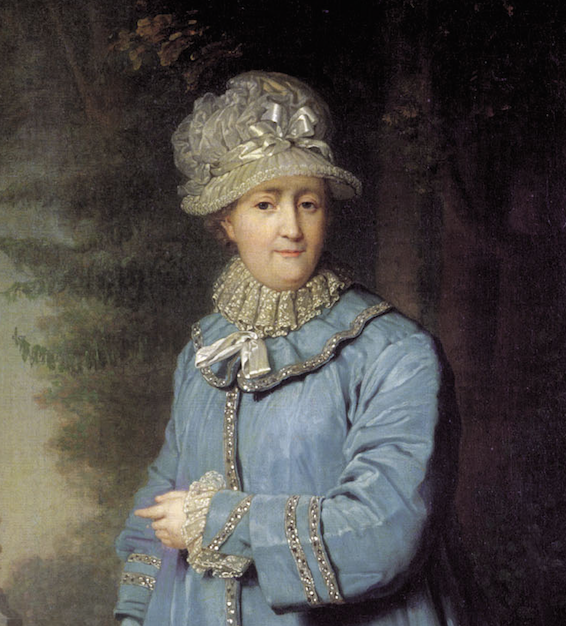 Catherine the Great died of a stroke while sitting on the commode in the palace at St. Petersburg. There, we said it.

Salacious rumors about Catherine’s demise have been grist for the mill for centuries, but in reality, Catherine was a great animal lover (and not in the way rumors have suggested). She had a particular affection for Italian Greyhounds, and her favorite was “Zemira.” The little Iggie was was named after the Beauty and the Beast opera heroine, Zemira.

Zemira slept in Catherine’s room in a cradle line in pink silk and usually joined her for daily walks. When Catherine had the artist, Vladimir Lukich Borovikovsky, paint her in 1794 she chose to be portrayed walking in the park with Zemira. The portrait is said to be a bit inaccurate since Zemira had been dead for almost ten years when the painting was completed, but art historians believe it to be a posthumous dog portrait rather than one of Catherine’s dog at the time. The other sculptures and porcelains of Zemira reveal just how special she was to Catherine.

When Zemira died, Catherine was inconsolable, and was said to have shut herself in her room for days. We know how that feels. Zemira was buried in Catherine’s pet cemetery under the largest tomb into which is etched the words, “Beloved dog of the Great Queen.”

A life-size porcelain figure of Zemira is now housed at the Peterhof Palace.

Image of Catherine and Zemira by Vladimir Lukich Borovikovsky