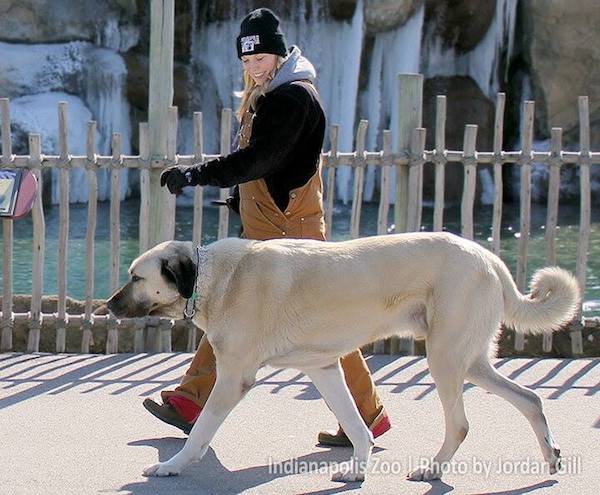 The other day, we talked about Livestock Guardian Dogs, and touched upon the Kangal Dog.  Most of us in the United States aren’t surprised to learn of this unique breed’s use as an LGD in a far away country like South Africa – but as an animal in a zoo – — in Indianapolis?????

As of 2013,  “Solo” and “Ayla,” both Kangals, were part of the Indianapolis zoo’s “Cheetah Family,” though of late, we see no mention of Solo. Ayla, however, is still mentioned on the Zoo’s website.  Ayla joined the Zoo’s family in 2009 when she was just eight weeks old, and she has served ever since as an animal ambassador to help raise awareness for cheetah conservation. These days, she can be found at the Plains Exhibit:
Susanne Wyatt, a senior keeper who works with the zoo’s four Cheetahs, says that while Kangals have a natural guardian instinct, Solo and Ayla were socialized through extensive training that began when they first came to the zoo. “They’re trained, basically, to sit politely and let people come up and pet them so that our educators and ourselves can talk about the Cheetah Conservation Fund and what role Kangal dogs play,” Wyatt said in an interview. At work, however, a Kangal’s large size, keen senses, intimidating bark and incredible strength make them ideal LGDs. Though the breed originated in Turkey, conservationists have found they’re also effective at keeping cheetahs away from farmers’ livestock in Africa. The dogs are known to work in hot climates, and stand between prey and predator as an intimidating presence, keeping the cheetahs at bay.  When farmers have Kangals on the premises, they are less inclined to hunt, trap, or shoot Cheetahs.