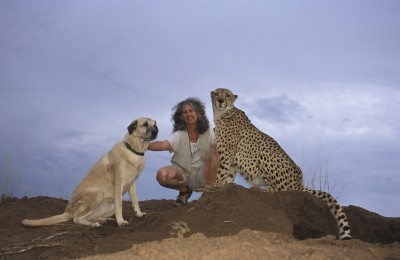 Sometimes we think that everything we ever need is already here, we just need to open our eyes and see it. Cheetah Outreach figured it out back in 1997 when it placed Anatolian Shepherd dogs on South African farms to guard livestock while reducing conflict between farmers and Cheetahs.  In 1994, Cheetah Conservation Fund (CCF), the world’s leading organization dedicated to saving the cheetah, also started placing Anatolians and Kangal Dogs with Namibian farmers as puppies to bond with the herd and use their imposing presence and loud bark to scare away Cheetahs. The dogs are highly effective, reducing livestock loss from all predators by over 80 and up to 100 percent. Farmers adopt the dogs and participate in education on how to train the dog. CCF does on site follow up visits to make sure the dogs have good medical care and proper training, and that they’re settling into their jobs. Farmers have enthusiastically embraced the program, and there’s now a two year waiting list for puppies. Each dog costs CCF over $500 a year in care which includes food, vaccinations, new-owner support, veterinary care and long-term monitoring (if you’re interesting in sponsoring a dog, you can do it here).

In 2013, Cheetah Outreach‘s Livestock Guarding Dog Project was expanded and split into 2 territories, the Limpopo Province and the North West Province.

How good are these dogs at their jobs? A couple of anecdotes from Cheetah Outreach:

You might say these dogs are a “green” way to preserve not just livestock, but predators. A win/win.

Image: Founder and Executive Director of Cheetah Conservation Fund, Dr. Laurie Marker with CCF’s two ambassadors – Koya, Anatolian Shepherd and Chewbaaka, an orphaned cheetah. The trio were a team for a decade. The team went to meet farmers and Namibian students and taught them about the Livestock Guarding Dog Program.