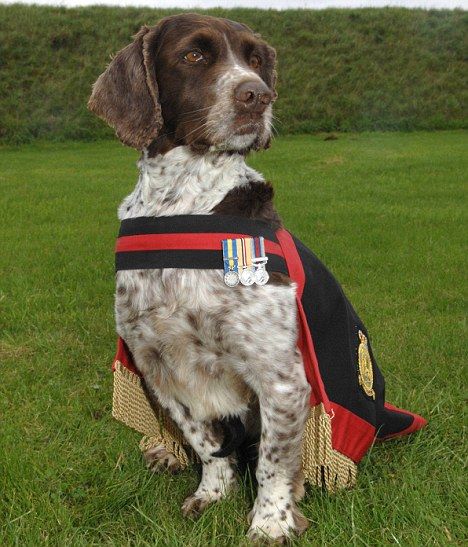 We often come across unforgettable stories while researching dog breeds, and in this case, we can across two of them involving English Springer Spaniels.

The United Kingdom’s PDSA Dickin Medal is the highest award any animal can receive while serving in military conflict. It was 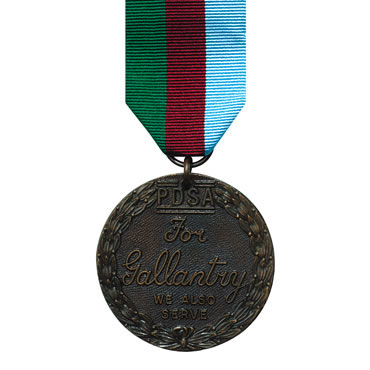 instituted in 1943 by PDSA’s founder Maria Dickin, CBE, and acknowledges outstanding acts of bravery or devotion to duty displayed by animals serving with the Armed Forces or Civil Defense units in any theatre of war throughout the world. The large bronze medal bearing the words “For Gallantry” and “We Also Serve” within a laurel wreath hangs from a green, brown and blue striped ribbon, the colors representing water, earth and air to symbolize the naval, land and air forces. The medal has been awarded 71 times since 1943 plus one honorary PDSA Dickin Medal which was awarded in 2014. The recipients have been 34 dogs, 32 pigeons, four horses and a cat.

Two of those thirty four dogs were English Springer Spaniels. In 2003, the medal was bestowed upon an English Springer Spaniel named, “Buster,” the only arms and explosives search dog working in Iraq at the time he earned the honor, though he had also served in Bosnia and Afghanistan. Because of his actions in discovering a weapons cache hidden in a hole in the wall covered with a tin of sheet, a wardrobe pushed in front of it, Buster saved service personnel from insurgents operating in the southern Iraqi town of Safwan; the cache included an AK-47,  many grenades, and bomb making equipment.

In quieter times, Buster and his handler since 2002, Sergeant Danny Morgan, worked together at the Golden Jubilee of Elizabeth II celebrations, and at the 2002 Commonwealth Games in Manchester. Buster’s value to the military was so highly regarded that he had his own chemical or biological attack protective gear. If a warning sound went off, Buster had been trained to enter a sealed pen equipped with an air pumping motor.

When Buster received his award,  these words were spoken:

“For outstanding gallantry in March 2003 while assigned to the Duke of Wellington’s Regiment in Safwan, Southern Iraq. Arms and explosives search dog Buster located an arsenal of weapons and explosives hidden behind a false wall in a property linked with an extremist group. Buster is considered responsible for saving the lives of service personnel and civilians. Following the find, all attacks ceased and shortly afterwards and troops replaced their steel helmets with berets.” 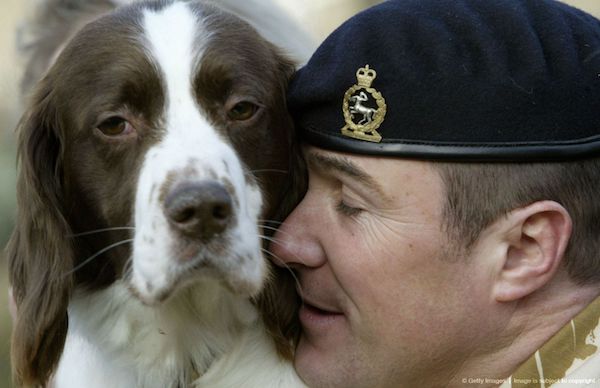 Buster served five tours of duty during his military career before retiring. He lived out his days with Sergeant Morgan and his family, but in 2015, the Royal Air Force announced Buster’s death.

Buster wasn’t the only Springer to have earned the Dicken Medal. “Theo” and his human partner, 26-year-old Lance Corporal Liam Tasker, spent their days in the Helmand Province of Afghanistan, hunting for roadside bombs and other deadly weapons as a team in the Royal Army Veterinary Corps’s 104 Military Working Dog Squadron. Together, the pair uncovered 14 bombs and weapons caches in only five months on the job — more than any other detection team in the Afghanistan conflict. Tragically, Lance Corporal Tasker was shot and killed by insurgents during a mission in the Nahr-e-Saraj district, and Theo died from an apparent seizure later that day, though Tasker’s family insisted that Theo died of a broken heart. In recognition of his heroism and ultimate sacrifice, Theo was posthumously honored with the Medal in 2012 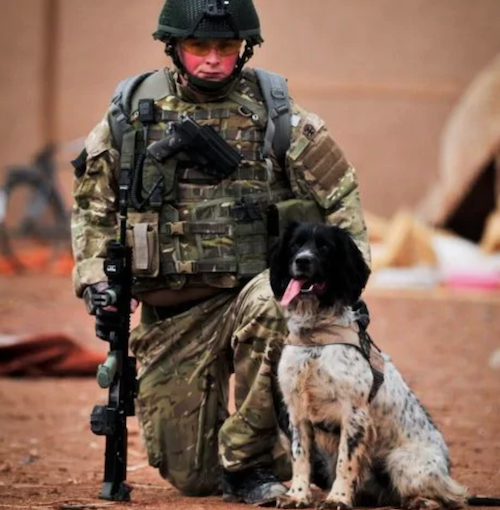 When in a discussion with those who suggest that purebred dogs are unsound, bring up Buster and Theo, and add that there is a reason that the military uses Belgian Malinois, Dutch Shepherds, Doberman Pinschers, Labrador Retrievers, and yes, English Spring Spaniels.

Insert photos of Buster wearing a row of campaign medals for his service in Bosnia, Iraq and Afghanistan. All photos found on Pinterest and happily credited upon receipt of information