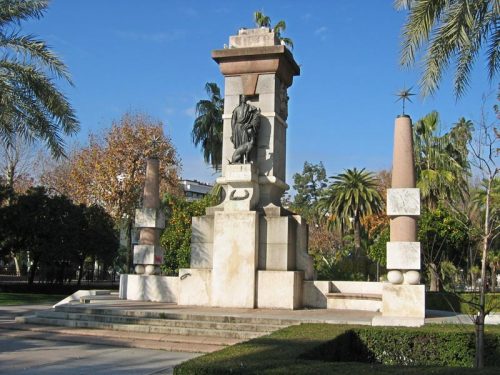 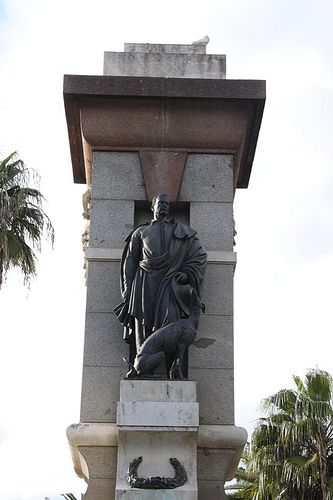 For our purposes, however, we mention Romero de Torres for his relationship with “Pacheco,” a black Greyhound he brought from Porcuna. Pacheco became closely linked to his master’s life, and those who visited the artist’s studio often saw the dog napping on a couch or lounging next to a brazier, but never far from his master. Guests described Pacheco as majestically silent as he perused the parade of journalists, actresses, bullfighters and models who surrounded the painter. Outside the studio, Pacheco became as popular in Madrid as his master.

When Romero de Torres died at the age of 55, Pacheco spent the whole night howling pitifully next to the corpse. Pacheco died three years later, and at the time it was said, “This poor Pacheco has died now. And he died in May and in Córdoba. The voice of logic and reason will say that he died of disease, of old age. But the truth is that he died of grief.”

A statue honoring the artist was commissioned to the sculptor, and an old friend of the painter, Juan Cristóbal. Fittingly, Pacheco was put front and center of the sculpture.

¹In the world of art, naked implies that a person is unprotected or vulnerable, and perhaps uncomfortable about it. Nude, on the other hand, means unclothed, and not only not embarrassed about it, but maybe even proud