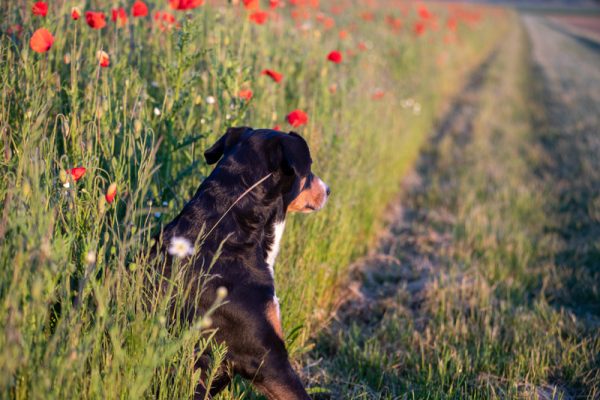 When the first International dog show was held in Winterthur in the Swiss canton of Zurich in 1898, eight of the dogs that were entered appeared in a brand new and separate category: “Cattle Dogs,” a class that was the result of a special commission formed by the Swiss Cynological Society which had fixed the breed traits of those eight dogs.  The Winterthur show was also the first recorded appearance of their breed at a multiple breed dog show.

The dogs were Appenzeller Sennenhunde, and the new class in which they were entered acknowledged their heritage. They had come full circle.

Part of Swiss history includes an occupation by the Roman Republic and Empire for six centuries.  The ancient Romans have long been considered by many cynologists to have been among history’s greatest dog breeders, and among the breeds they kept was the Roman Cattle Droving Dog. These dogs drove vast herds of semi-feral cattle in the trail of Roman legions wherever they went around the world, and when Romans entered Switzerland, dalliances likely occurred between their cattle droving dogs and the lupomolossoids they found when they arrived.  Most experts believe that the Appenzeller descended from these unions, and thus the “cattle dog” class at the Winterthur show in 1898 made complete sense. Appenzellers can seemingly do it all, from working as avalanche dogs to serving as tracking and draft dogs, but this is a quintessential drover’s dog, vocal herders that control stock with their sharp, clear bark, and are fearless at nipping at the heels of cows that stray out of line.

Today, the breed is primarily kept as companions, but they are still used in many places as working cattle dogs even today.

One thought on “Full Circle for the Appenzeller”