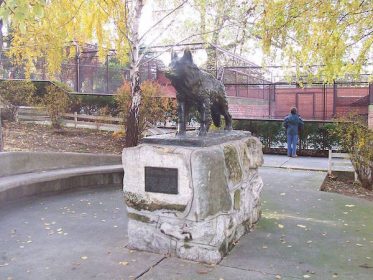 Did you ever hear the story about “Gabi,” a German Shepherd Dog adopted by the Belgrade Zoo in the 1980s?

Gabi was eight years old when she came to the zoo. Paired with another dog, the team acted as informal security guards. She wasn’t young, but she was courageous. One summer night in 1987, Gabi was with the human guard, Stanimir Stanić, who failed to notice a jaguar that had escaped from its cage. Gabi sensed immediate danger and put herself before the guard before jumping on the cat. The other dog ran in terror.

Gabi fought the jaguar throughout the zoo giving Stanić time to telephone the police. Gabi’s actions prevented the jaguar’s escape from the zoo and most certainly saved Stanić from a possible attack. Sadly, Gabi was found half-dead in a large pool of blood. She fearlessly battled an opponent much stronger than herself, and in the process, prevented the cat from escaping the zoo and attacking people and pets.

An injured Gabi was operated on at the Faculty of Veterinary Science at the University of Belgrade and nursed back to health by the zoo’s director Vuk Bojović and others touched by her actions. Gabi made a full recovery and returned to her duties. Later, the zoo erected a monument to this brave dog. On the pedestal of the monument is a plaque with the inscription: “Gabi – her heart was stronger than a jaguar.”