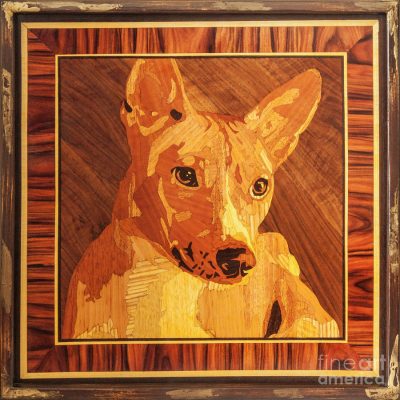 As the story goes, Hatshepsut’s was entering her eighth year as queen. She installed her Chancellor, Senenmet (also seen as Senmut) on one of five ships powered by thirty rowers. They left the Quseir on the Red Sea for to trade their plants and animals for myrrh, frankincense and fragrant pungents used for cosmetics and in religious ceremonies. Among the animals was the Jumping Up dog, and it was possibly the first time that the Basenji was seen beyond its borders.

It was the 19th century before the breed was seen again by outsiders. Africa explorer, Dr. Georg Schweinfurth, noted the unusual dogs in the Bahr-el-Ghasal in Central Africa used by the Azande tribes to hunt. In hindsight, we know he had seen Basenjis. He wrote: ”The only domestic animals whom the Niamniam bother to raise are chickens and dogs. The latter belong to a small spitz-like race but with smooth and short fur and with big, always upright ears and a short, thin tail that is always curled up tail similar to piglets. Their color is a light leather yellow with a white collar on their neck. The small, pointed snout is sharply set off from the arched head. Their legs are quite long and straight and prove that this race has nothing to do with the dachshund-like dogs in the ancient Egyptian temple images. These Niamniam dogs also lack, like all other dog families of the Nile area, the rear claw of the hind legs. One hangs wooden bells on their necks, ostensibly to prevent them from getting lost in the prairie grasses. The animals strongly tend to obesity, just like their owners, who intentionally fatten them because the meat of these dogs is one of their preferred delicacies.”

Schweinfurth returned to Europe with a female, but the dog jumped to her death when she leapt out of a hotel second floor window in Alexandria.

Later, H. H. Johnston shared interesting notes on the Congo dogs following his time on an expedition from the Congo to Bolobo, and he described prick-eared, foxy headed, and smooth fawn colored dogs that never barked, and had a deep attachment with their African masters.

Another pair was brought to England in 1895, but they contracted distemper and died shortly after arrival. The world didn’t really hear of the Basenji again until 1937 when Mrs. Byron Rogers brought a pair to America. They were exhibited as natural curiosities, and caused such a sensation that authorities were called in for crowd control. Sadly, the litter they produced also died of distemper. 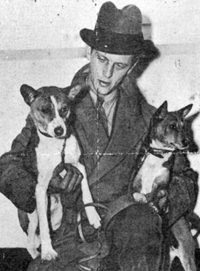 Four years later, Alexander Phemister (who would become president of the Basenji Club of America) acquired a Basenji named “Congo” who’d been brought from Africa to Boston. Shortly after he got Congo, he got “Bois” (AKC number: A738970)  and the pair were mated. They produced the first litter of Basenji puppies (one male and 3 females) to be raised to maturity in the United States.

Image: Marquetry panel of Basenji by Vladyslav Kasatkin is available as fine art, as lifestyle items, and in home decor here.  Image of Bois seen on Pinterest and also on the Basenji Club of America website, credit given upon receipt of original information